Believe it or not, I’ve never had Chipotlé. There are so many good Mexican restaurants in Los Angeles and the San Fernando Valley that chain restaurant “fast-food” from Chipotlé was never a “go-to” option.

We had a Coupon (and it was about to expire on May 1) for a FREE Burrito, Burrito Bowl or Order of Tacos at any Chipotlé Mexican Grill. And there’s one that opened up relatively recently in Encino on Ventura Blvd and we’ve wanted to try it for awhile now.

NOTE: We’ve been hesitant to eat at Chipotlé because of the recent “food-borne” illness news reports centered on the restaurant chain, which is why we call this a test.

So, Wednesday evening at 7pm we stopped and picked up an order “TO GO” for dinner on our way to our friend’s place in North Hollywood. 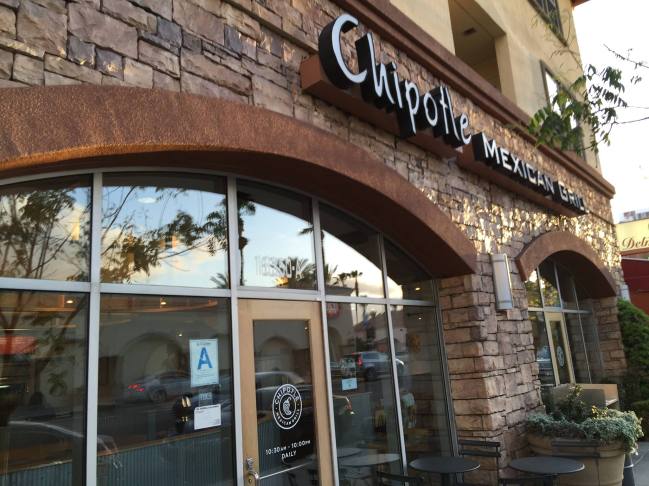 There’s metered street parking on Ventura Blvd (8am-8pm) but you can’t park on the street between 4-7pm because it’s an ANTI-GRIDLOCK ZONE during “rush hour”, so there’s drive-in underground parking (which we can’t tell you about because we parked on the street just after 7pm).

The restaurant was clean and bright with a big letter “A” health rating on the front window which was good. It wasn’t very busy and there wasn’t any wait to order, which is always of concern at fast service restaurants where the food sits and waits for a customer.

The young guy behind the register said hello from across the empty front area as we entered. The young woman who prepared the order was very business-like and efficient, but not very friendly (and she shorted us on the steak…yes we noticed that sneaky move!) as she quickly made our Burrito Bowl. 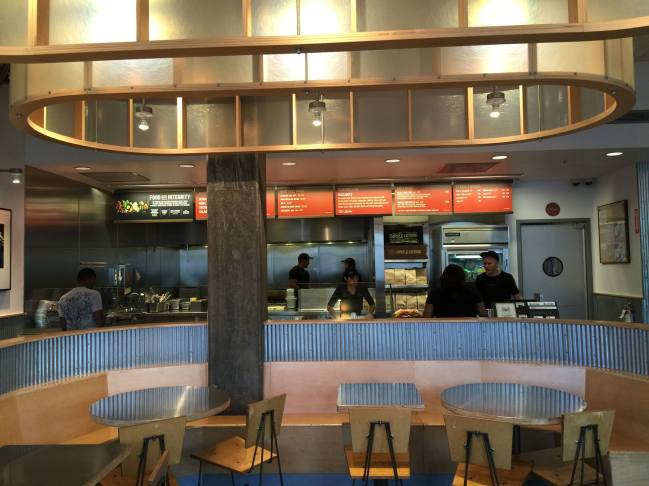 We exchanged the food for the coupon and took it “TO GO” We drove over to our friend’s place and ate after we arrived, so the food traveled in the car for about 15 minutes. We removed the lettuce from the bowl and heated the meat, rice and beans in the microwave for a minute to get it hot again. We emptied the contents of the bowl onto the tortilla, added the guacamole, took a few pics, rolled it up into a very large burrito and promptly ate the whole thing (except the lettuce, which we didn’t eat at all) and it was okay. Not great, but we were very hungry so it was good. And the price was right, it was FREE. 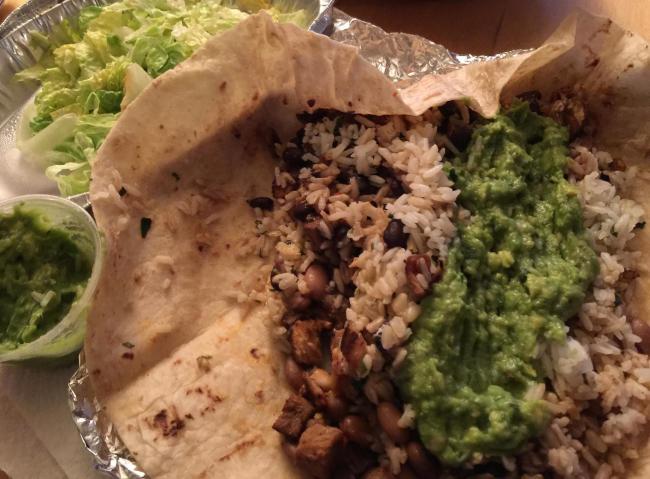 “Rub-A-Dub-Dub Thanks For The Grub!”

We would eat there again, but it still wouldn’t be a first choice for “fast casual” Mexican food, It wasn’t bad, it wasn’t great. It was okay and it was an okay value. There was a lot of food in that large burrito and we don’t feel sick the next day.

NOTE: My own homemade steak soft tacos the previous night were much better! 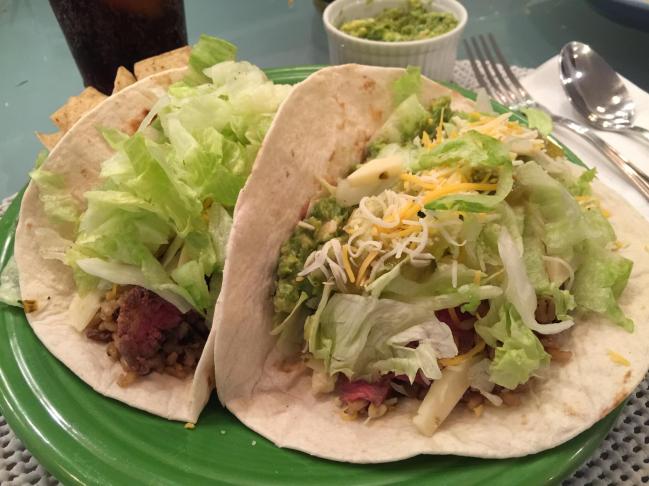 We like to cook fresh Mexican at home. We enjoy Cuban food from Versailles and casual Mexican food from El Torito and Poquito Mas. And every once in awhile we’ll eat at Taco Bell or Del Taco, although that doesn’t really count as Mexican or real food. 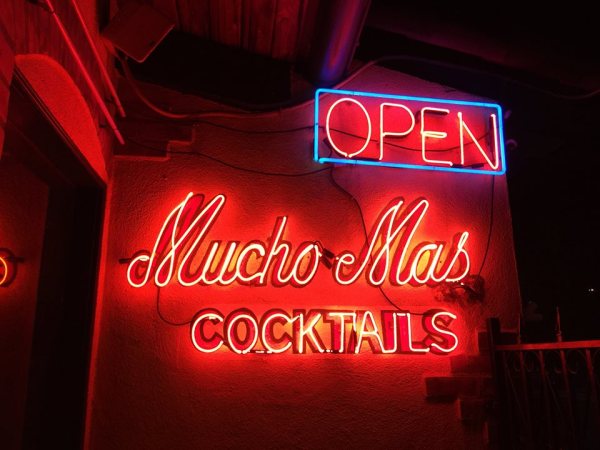 We like to eat at Mucho Mas in NoHo. And we also like to call, order and pick up a very large and tasty Chicken Burrito with rice and beans “Gringo Style” (with melted cheese and red sauce on top) from Las Fuentes Mexican Restaurant on Vanowen just east of Reseda Blvd in Reseda for about the same price as Chipotlé: 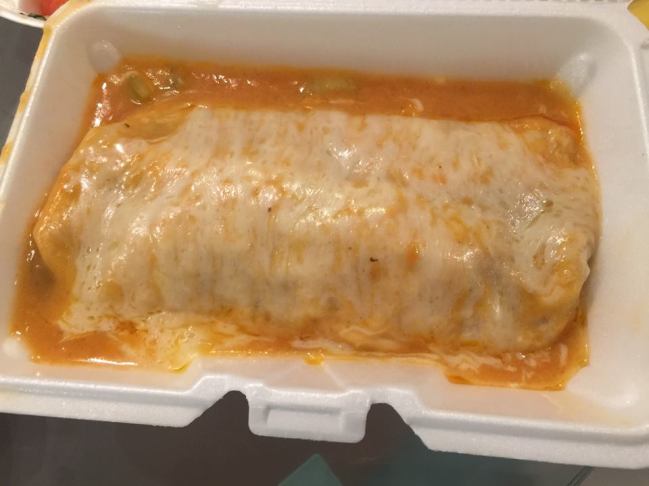 We got recently got one “TO GO” with fresh made chips, a large avocado salsa, and a variety of different salsas from the salsa bar and we made the fresh guacamole at home before going to pick up the order. 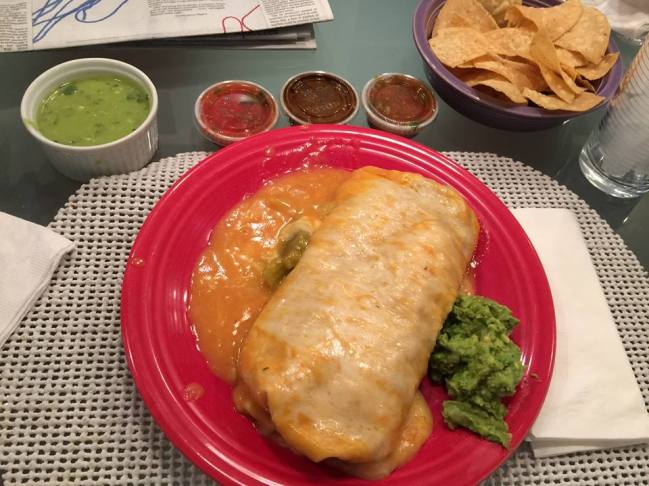