Dead & Company
at the Fabulous Forum in Inglewood, California
Friday 12-27-19

We were gifted a ticket from a friend for Christmas!

Friday night, lots of traffic on the 405 and into Inglewood on the way. Parking was confusing and we ended up paying $30 to park far away near the SOFI Stadium still under construction. So we walked a long way to get into the Fabulous Forum. 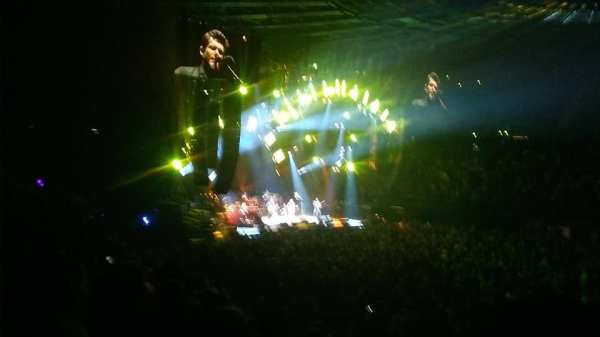 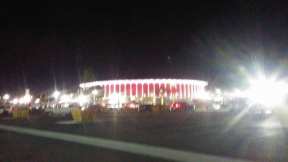 The doors were open and the show was starting when we arrived and the BULLS*T security check took a lot longer than it should have, even though there was no line! They had walk-through metal detectors and untrained staff working the tables….

So we cleared the checkpoint and in we went, we missed the Truckin’ opener and didn’t even bother to go to our designated seat in the back nosebleeds. Instead we moved to the front and down into the side loge boxes and found an unoccupied seat with a great view of the band onstage during Alabama Getaway. It was actually two empty seats, so we had room to dance a little. And we enjoyed the view so much, that we went back after intermission and danced there for the second set too. 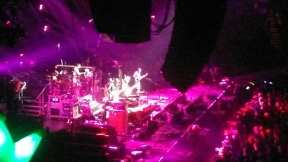 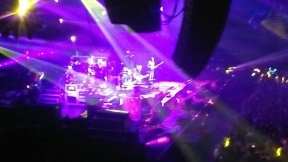 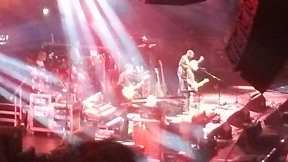 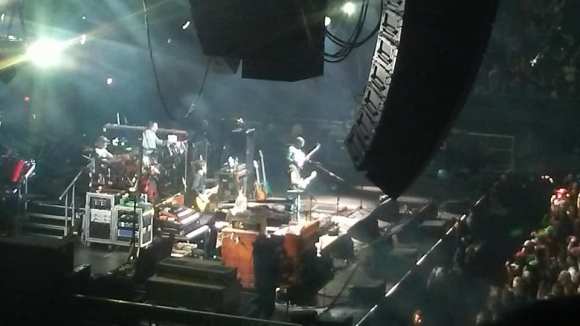 Have to admit that it was my first live Dead & Company show. Had not seen them live in person before, only via vids and live interweb transmissions, so being there was great! The show was a little slow in places for my taste and they noodled (improvised jam session) a whole lot. Kept thinking how much we miss Jerry Garcia, and especially how much we miss Brent Mydland and his keyboards/piano/organ and vocals.

Intermission! We headed for concessions and got a bag of nacho cheese Doritos and a bottled water ($4.50 + $5.50 = $10) and it took forever in a relatively short line…. we used the restroom and wandered around outside checking out the scene on the smoking patio.

Expensive Concessions at the Fabulous Forum

2nd Set TERRAPIN! They were teasing Dark Star all through the first set, so when they went into Lady With A Fan>Terrapin Station after Playing In The Band it really made our night! Oteil sang China Doll and they sandwiched Drums/Space inside The Other One. They closed out the set with a long Wharf Rat and rocking’ US Blues. And then they played Dark Star the following night (which we watched on the interweb). 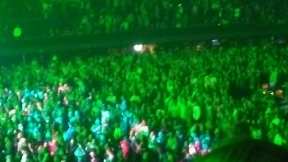 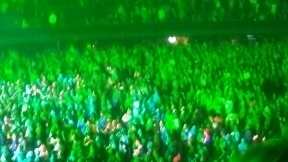 They closed the show with an encore performance of Ripple (with Bob and John playing acoustic guitars) as a tribute to the late great Robert Hunter.  It was beautiful, and of course the audience always sings along! The show finished at one minute to eleven.

Cool guitars! Outside on the patio, they had more concessions, merchandise stands (with shirts and hoodies priced from $45-$100), and the Participation Row area. Win a guitar or bid and buy a guitar? Of course always for a good cause. 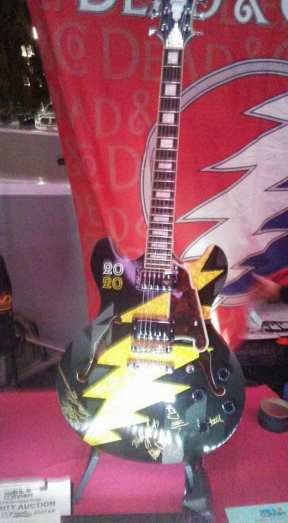 HAPPY NEW YEAR 2020!
New Years Eve in San Francisco with Dead & Company
Bill Walton and Wavy Gravy as Father Time and Baby New Year at Midnight!
Trixie and Sunshine flew in over the audience in a biplane “The Dead Baron” built from the skeleton of the “Giant Joint”. We weren’t there, we watched it LIVE on the interweb.

NOTE: We started feeling sick with a sore throat and didn’t go out on New Years Eve because we didn’t want to expose any of our friends to our oncoming illness.

1 thought on “Dead & Company at the Fabulous Forum in Inglewood, California Friday 12-27-19”