“Art is what you can get away with.”

“Everyone will be famous for 15 minutes.” 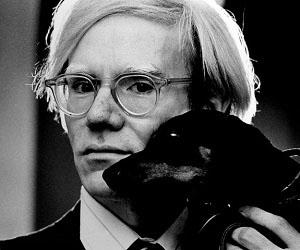 “An artist is somebody who produces things that people don’t need to have.”

“My fascination with letting images repeat and repeat, or in film’s case ‘run on’,
manifests my belief that we spend much of our lives seeing without observing.”

“I want to die with my blue jeans on.” 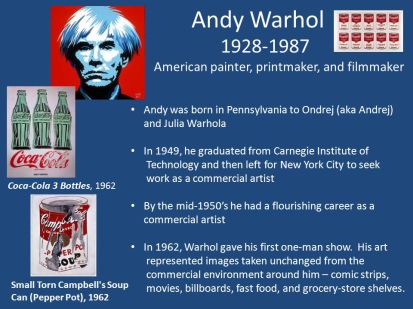 Andy was born in Pennsylvania to Ondrej (aka Andrej) and Julia Warhola. In 1949, he graduated from Carnegie Institute of. Technology and then left for New York City to seek. work as a commercial artist. By the mid-1950’s he had a flourishing career as a. commercial artist. In 1962, Warhol gave his first one-man show. His art. represented images taken unchanged from the. commercial environment around him – comic strips, movies, billboards, fast food, and grocery-store shelves. Coca-Cola 3 Bottles, Small Torn Campbell s Soup Can (Pepper Pot), 1962.

Pop artist changed the art world in the late 1950s’ and 1960s’. They presented images from every day life and from the commercial world around them. Their images came from comic strips, movies, billboards, and grocery store shelves. Some critics felt that pop art images were a commentary of the proliferation of mass-produced products and contemporary culture. Warhol used a giant Campbell’s Soup Can and Brillo Soap Pads as imagery in early art works, reminders of a childhood spent at home while he was ill. Warhol focused much of his attention to the faces of movie stars and popular celebrities of his time. Many of his Pop art images use high contrast colors and exaggerated off register edges. Artist Technique/Media: His work and that of other Pop artist used hard edged lines, an impersonal quality using screen printed or painted flat, bright colors, and are unrealistic and not flattering.

Andy was born in 1928 in Pittsburgh as the son of Slovak immigrants. His original name was Andrew Warhola. His father was as a construction worker and died in an accident when Andy was 13 years old. Andy showed an early talent in drawing and painting. After high school he studied commercial art at the Carnegie Institute of Technology in Pittsburgh. Warhol graduated in 1949 and went to New York where he worked as an illustrator for magazines like Vogue and Harpar s Bazaar and for commercial advertising. He soon became one of New York s most sought of and successful commercial illustrators. In 1952 Andy Warhol had his first one-man show exhibition at the Hugo Gallery in New York. In 1956 he had an important group exhibition at the renowned Museum of Modern Art. In the sixties Warhol started painting daily objects of mass production like Campbell Soup cans and Coke bottles. Soon he became a famous figure in the New York art scene. From 1962 on he started making silkscreen prints of famous personalities like Marilyn Monroe or Elizabeth Taylor. The quintessence of Andy Warhol art was to remove the difference between fine arts and the commercial arts used for magazine illustrations, comic books, record albums or advertising campaigns. 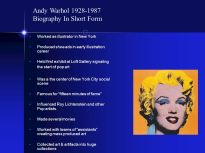 Materials: He worked in a range of media, including painting, printmaking, sculpture, film, and music. Warhol turned to photographic images from advertising and journalism as the starting-point for his celebrated silkscreen paintings. 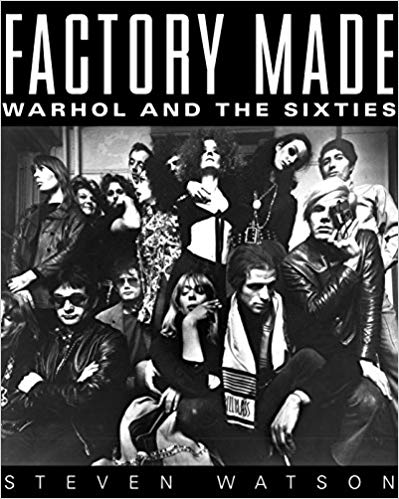 “Factory Made: Warhol and the Sixties” is a book about the avant-garde group that came together as Andy Warhol’s Silver Factory from 1964 to 1968.

“Andy Warhol’s FACTORY PEOPLE”, tells the story of the 60’s Silver Factory that Andy founded in 1964 in an abandoned hat factory on East 47th Street in New York City. The Silver Factory lasted until 1968 when Andy gave up the lease and moved to the White Factory on Union Square. Shortly after moving in the Spring of ’68 Andy was shot by Valerie Solanas and this event bookends the period of time covered in “Factory People”. The idea of the film is to tell the real story of the culture, who was there with Andy, who participated in the work with Andy, and what really happened during this period…all without passing judgement on Andy, his work, his friends, and the people who were there at the time. The film takes and in-depth look at the lives and times of the people who hung out with Andy and “worked” at the Silver Factory during the Sixties, making it all click as a new counter-culture arose and began to exert its influence throughout the arts.

NOTE: This is another new Blog Post we started last year, and then it sat dormant for a long time, so we’re posting it in March 2019! Hope you enjoy it.

“Isn’t life a series of images that change as they repeat themselves?”

“I think having land and not ruining it
is the most beautiful art that anybody could ever want to own.”

“They always say time changes things, but you actually have to change them yourself.”