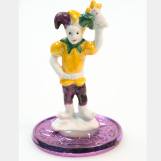 Broncos Country turned out in force to celebrate the Super Bowl victory in Denver!

Peyton wanted the ball from the two-point conversion pass from Bennie, so he traded a signed game jersey for it. He got the ball, but Von Miller got the cover of Sports Illustrated. 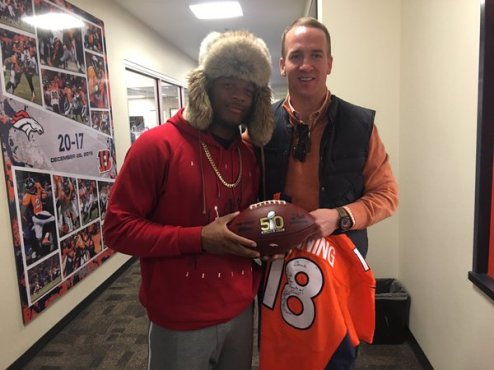 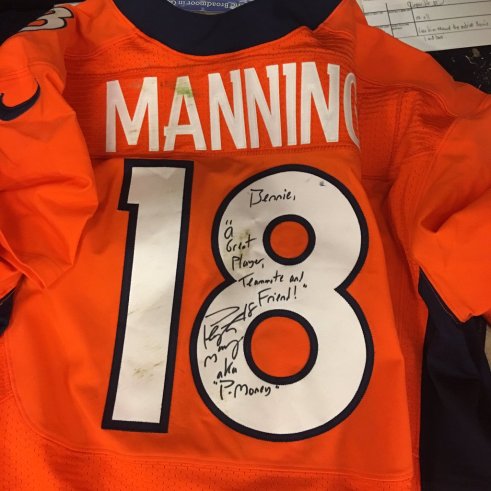 and Today is Wine Wednesday!

CHEERS! Have a great day!

It’s Monday afternoon, the day after. Did you go to work today?

I have a massive headache.

I guess it’s a good headache. I celebrated the Broncos winning Super Bowl 50!

And there was much rejoicing! The Denver Orange Rush – Orange Crush 2.0 DOMINATED! Fans celebrated into the night and early morning, both in Denver and around the world. Peyton Manning got another ring, drank a lot of Budweiser and went to Disneyland today! 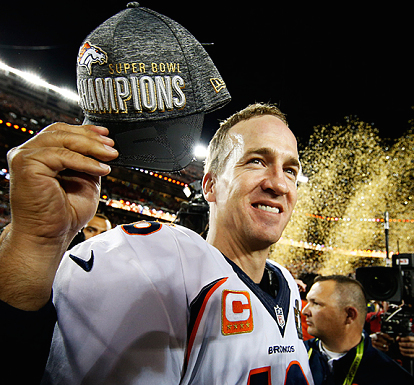 We had a party and watched the game.

On the Menu: Baked Buffalo wings, crudité plate with ranch dressing, garlic hummus & fresh made guacamole with tortilla chips, pistachio nuts, Doritos cool ranch chips, lightly salted peanuts, mini twist pretzels, pepperoncini kettle chips and MEGA peanut M&Ms. NOTE: It was a non-alcohol day, so orange/pineapple/cran-raspberry juice, iced espresso and coke were the beverages of the day. And of course there were Oranges! 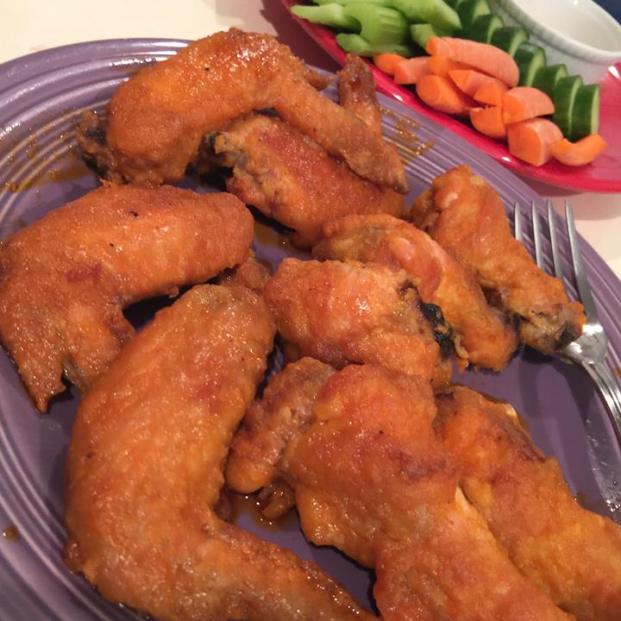 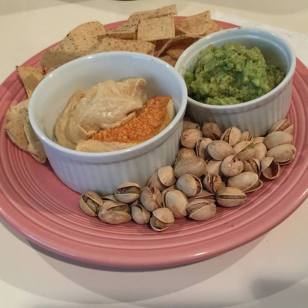 Halftime Show (for better or worse)

Coldplay just sucks. Pop music that doesn’t matter. Someone asked when they saw the rainbow motif, “Are they gay?” Other really snarky comments were tweeted. Then Bruno Mars got uptown funky, and was the highlight of the Halftime show, you can’t not like him. And then we were treated to Beyonce’s crotch! I think I like her old stuff better. Nothing wrong with a little “booty-shaking” at the Super Bowl though! It was better than “Up With People” or the New Kids On The Block. I was entertained (for better or worse). 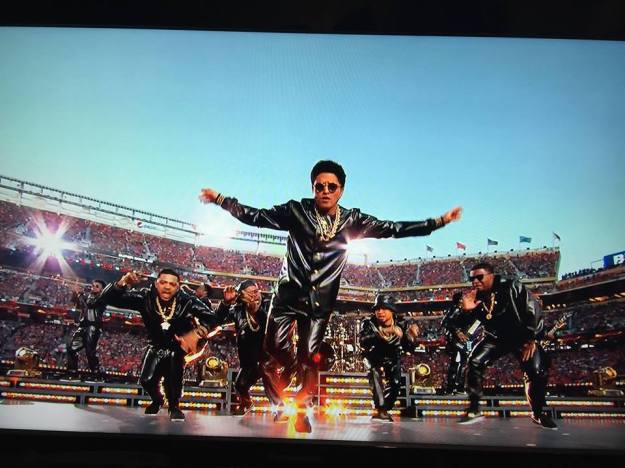 BRONCOS FOR THE WIN!

Big Congratulations to everyone involved! I thanked them in the previous Blog, and I’ll thank them all again! This win was sweeeeeeet! 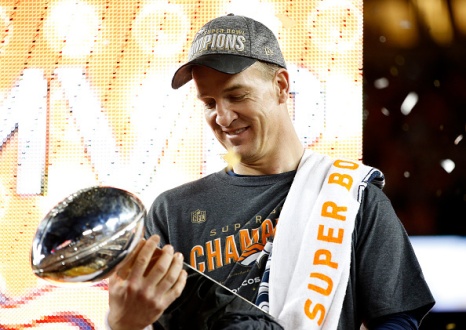 And then Peyton thanked Budweiser, G-d and Papa John…

And he can take a hit: (RIGHT CLICK AND “OPEN IN NEW WINDOW” TO SEE VIDEO) https://www.youtube.com/watch?v=CAMJ2zXS19Q

The Denver Defense won the game! They dominated all season long. The “Orange Rush” was the deciding factor in every game they won, and the secondary was exceptional.  the Orange Crush 2.0 excelled at pressuring the QB, executing pass coverage and making big plays when needed. And all three were key factors in the Broncos victory. 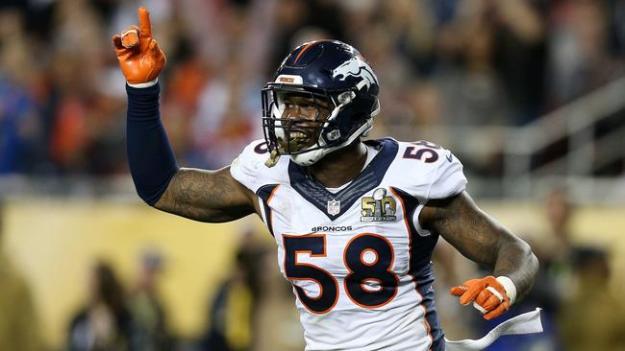 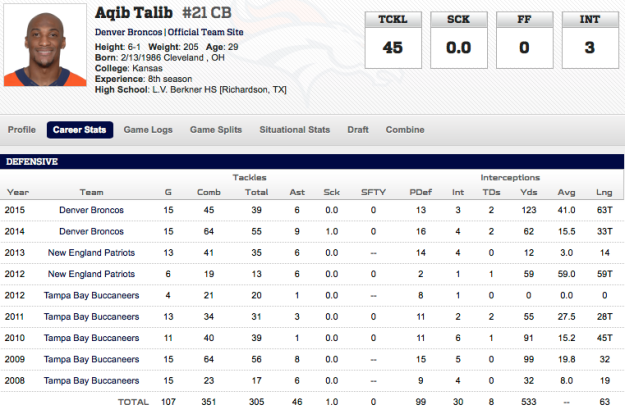 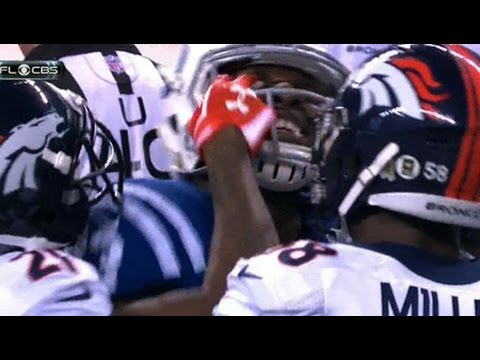 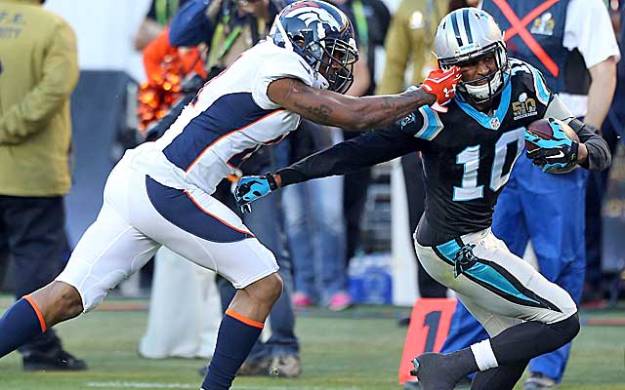 This was an INTENTIONAL FACEMASK! Personal Foul 15 yards, Automatic First Down! 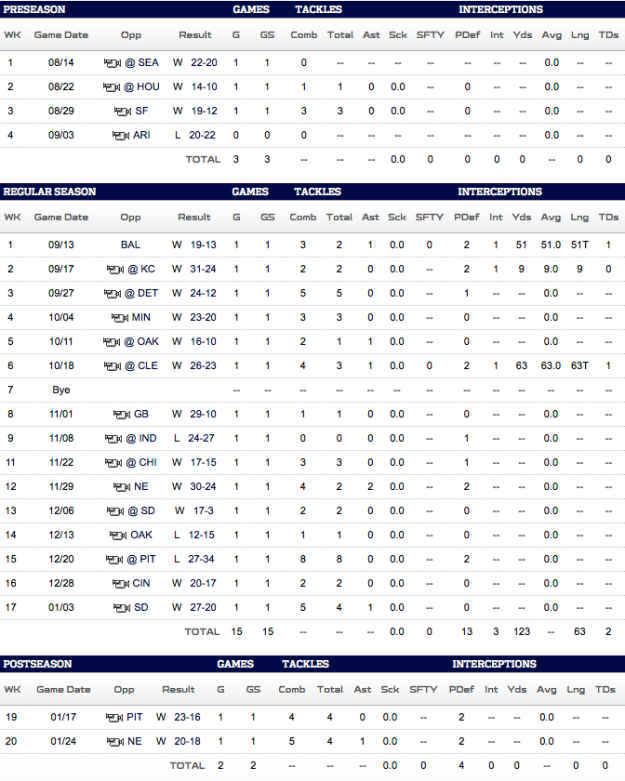 What the F*ck? Is Aqib Talib’s play so valuable that he should be allowed to cost the team a win and give the Broncos a black eye along with the other team’s player? Do we need a player who commits intentional penalties and deliberately injures other players? If the Broncos had lost, there would have been a lot of questions about his first quarter play!

And what about Cam Newton? What a LOSER! He got beat. He got punished. He was sacked six times and he fumbled in the fourth quarter with four minutes left when Von Miller threw him to the ground. Not only did Newton not go for the loose football, he jumped back after the Broncos’ defenders dove for it.

After his behavior this year and all his trademark celebrations: his dabbing and dancing, his fake jump shots after touchdowns, he completed 18 of 41 passes for 265 yards and ended the game with one interception and two fumbles. He was throwing a tantrum on the sideline and in the end zone during the fourth quarter, showed little respect to the winning opposing team and then acted badly after the game. 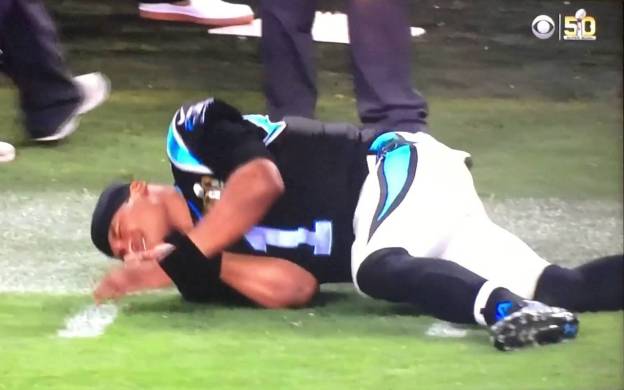 Cam Newton only spent five minutes an the post game press conference before bolting. “They just played better than us. I don’t know what you want me to say. I’m sorry. They made more plays than us, and that’s what it came down to. We had opportunities. It wasn’t nothing special that they did. We dropped balls. We turned the ball over. We gave up sacks, threw errant passes. That’s it. They scored more points than us.”  After the constant beating from the Broncos Defense, poor sportsmanship, bad behavior and a bruised ego was all he had left after the game.

Only a few of the Tweets from the AFC Championship Game:

And only a few from Super Bowl 50:

Well, it was a VERY GOOD DAY! The Broncos won the Super Bowl! I am very happy. 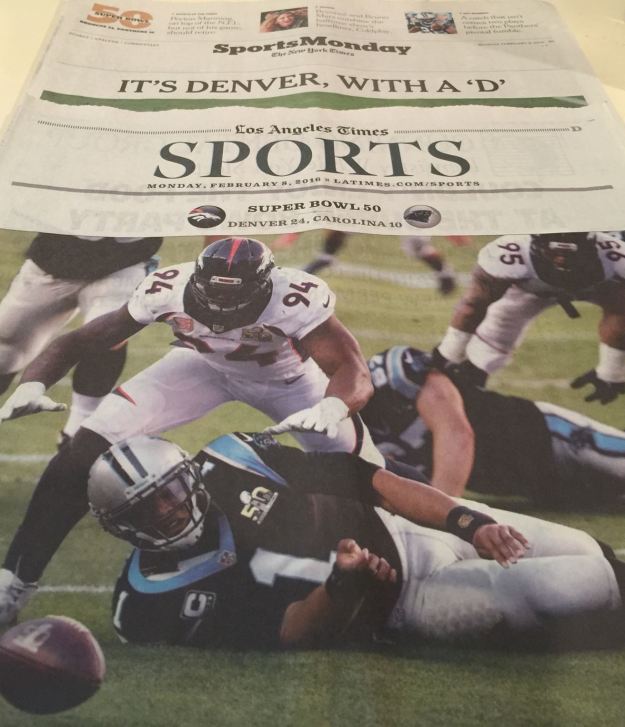 This just in! Dead & Company headlining at Bonnaroo 2016 in Manchester, Tennessee on June 9th and will hit the road for a summer tour starting June 10th!

The jam band is also scheduled to appear on The Tonight Show Starring Jimmy Fallon on February 18th.

Well, it’s 3:30am on Superbowl Sunday, kickoff is twelve hours away, and I’m so excited I just can’t sleep! GO BRONCOS! My team is in the Superbowl again!

I stated it before the season started and there are live breathing witnesses who heard me say loud and proud, and without hesitation, “The Broncos are going to the Superbowl.”

Thank you Orange Crush 2016! THE DENVER DEFENSE DOMINATED EVERY GAME!

New England Patriots QB Tom Brady (12) is hit by the Denver Broncos outside LB Von Miller (58) and called for a late hit penalty after being sacked by Broncos DE Vance Walker (96) during the 2nd half of the Nov. 29, 2015 game in Denver. (AP Photo/Joe Mahoney)

They penalized us, they fined us, they suspended players and the Denver Broncos still made it to the Big Game. Many of the penalties were due to STUPID out of control behavior, and at least one cost us a win. Late hits and personal fouls are just wrong. However, some of the penalties were just bad calls and we’ll never know what really happened with a certain officiating crew in question. Record fines were issued to Denver players and suspensions were ordered (again some for questionable offenses and some were absolutely well deserved) by the NFL, and still the Broncos were triumphant!

Thank you and congratulations Wade Phillips! (Assistant Coach of the Year!) 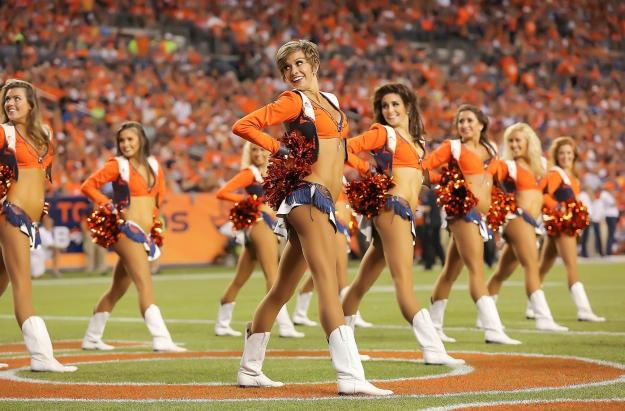 I’ve been a Broncos fan for 40 years and have the pictures to prove it!

I went to the market and I’m ready for the big game, now only eleven hours away.

I told a friend earlier tonight (yesterday) that this time tomorrow (today after the game), I’ll either be very happy or very sad. I’m betting on HAPPY! Enjoy the game! 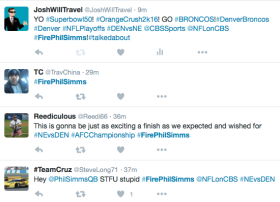 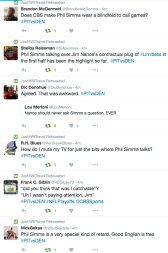 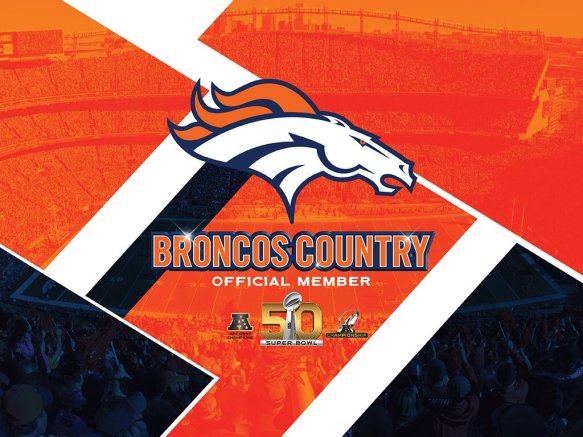 THIS JUST IN! Puppies predict the Denver Broncos will win Super Bowl 50!

“He became a man the day of the greatest game he ever played. Everything he ever knew about common decency and morality he learned that day in December from Alan “The Horse” Ameche; and today in the Superbowl he would earn his wings. The crowd had assembled; a crowd of America’s elite. Toyata salesmen from all around the country — orientals and even those suspected of being orientals — stacked on the thirty yard line watching him sweat and wipe caked blood from his face. The Gallow brothers — Ernest and Julio — party guys who had skinned a few Mexicans and forced them to carry them on their shoulders down to the pre-game tailgate parties at the colosseum. The Pepsi and Coca Cola bottlers of America — Coke adds life; It’s the real thing — bombarded by missiles; flying flaming matchbook covers. The waterheads from General Motors up in the top seats where they belong; getting the worst of the pollution. All sorts of weird motherf*ckers were at the game.”-“Where the Buffalo Roam” Bill Murray as Hunter S. Thompson.

Bill Murray & Peter Boyle in “Where the Buffalo Roam”

“Tickets, passes and a key? Must be some sh*t goin’ down somewhere.”

Remember! Don’t be this guy at the party!