Saturday night performance at the Hollywood Bowl on a beautiful, warm, summer night in August! And what a great show! The celebrity cast was awesome! It was so much fun!

“Spamalot” at the Hollywood Bowl – A Beautiful and Warm Summer Night!

Spamalot at the Hollywood Bowl

Picnic on the bench:

“Spamalot” Picnic at the Hollywood Bowl – No ham, jam or spam. (there was bacon)

NOTE: Our bench seats were in section K2, which is high up and way off to one side. The wood benches are really uncomfortable, even with seat cushions. I prefer the Box Seats!

FINGER OF SHAME! This couple insisted on using bench space for their bag! And when asked if they would make more room, they refused and copped an attitude! This is a picture of their shame after being TOTAL A**HOLES in a fun place!

Look at their facial expression and body language!

FINGER OF SHAME! – They know they’re being Total A**holes!

Well the show must go on! And the a*ssholes were ignored.

“Spamalot” at the Hollywood Bowl – Sunset!

It was great from the opening national anthem, when the orchestra began with “Hail Brittania” before being interrupted and playing the Star Spangled Banner, to the “England” introduction by Eric Idle as The Historian, and the opening number celebrating Finland with the Fish Slapping Dance!

The Historian: “I SAID ENGLAND!”

“Spamalot” at the Hollywood Bowl – “What happens in Camelot, stays in Camelot!”

Loosely based on Monty Python and the Holy Grail there were great bits from the film: “He must be a king”, debating the airspeed of the European swallow, taunting by the French, “large tracts of land” and storming the castle, the Trojan Rabbit, the Ballad of Sir Robin, the Knights who say Nee, Tim the Enchanter, the Vorpal Bunny and of course Camelot!

Warwick Davis gave a fantastic performance as Patsy, King Arthur’s squire complete with coconut shells and amazing facial expressions! He is such a gifted actor. 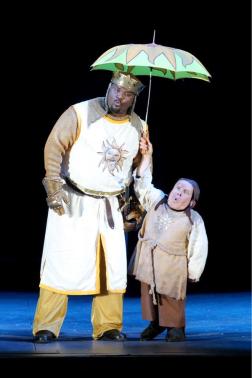 Tom Deckman was hilarious as Not Dead Fred, Prince Herbert and the French Guard. Merle Dandridge was dazzling as the Lady of the Lake and her musical numbers were mesmerizing! 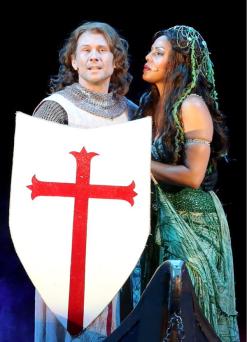 Kevin Chamberlin, Jesse Tyler Ferguson, Rick Holmes and Christian Slater were just terrific as Arthur’s Knights (and the many other minor roles they alternately played). And Craig Robinson was a very entertaining King Arthur, smiling and “tap dancing” his way through the whole thing.

There were wonderfully entertaining musical numbers with inspired dance and fun choreography. And a number of jokes were tailored to the Hollywood Bowl audience including a jab at “overpriced dinner in the Pool Circle” and a little “Uptown Funk”. 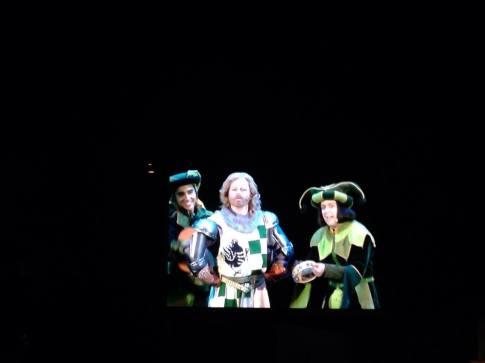 Wonderful performances by the entire cast! You could tell they were having a great time performing. I was really impressed by how great they all were!

And big kudos to the Hollywood Bowl for their live video on the big screens, as well as the costumes, sets, sound, lighting and projections which really make the musical productions special.

“Always Look On The Bright Side of Life”

Some things in life are bad…They can really make you mad.
Other things just make you swear and curse.
When you’re chewing on life’s gristle, don’t grumble, give a whistle,
And this’ll help things turn out for the best……….
And, always look on the bright side of life…(Whistle)

Always look on the light side of life…(Whistle)

If life seems jolly rotten, there’s something you’ve forgotten!
And that’s to laugh and smile and dance and sing!
When you’re feeling in the dumps don’t be silly chumps,
Just purse your lips and whistle, that’s the thing.
And…always look on the bright side of life! (Whistle)

Come on. Always look on the right side of life! (Whistle)

For life is quite absurd and death’s the final word.
You must always face the curtain with a bow.
Forget about your sin, give the audience a grin!
Enjoy it! It’s your last chance anyhow.

So always look on the bright side of death. (Whistle)

Just before you draw your terminal breath. (Whistle)

Life’s a piece of shit, when you look at it.
Life’s a laugh and death’s a joke, it’s true.
You’ll see its all a show, keep ’em laughin’ as you go,
Just remember that the last laugh is on you!

I mean – what have you got to lose? You know, you come from nothin’.

You’re going back to nothing. What have you lost? Nothing.

Always look on the right side of life…

Nothing will come from nothing ya know what they say?
Cheer up ya old bugga c’mon give us a grin! There ya go, see!

Everyone knows the words! Whistle and sing along! A good time was had by all! The full Blue Moon was shining brightly overhead as the large crowd exited the Bowl at 10:30pm. It was packed and we were on the far side, so I sat and waited for the audience to disperse a little and then cut through the seats directly to the exit. I went right when I should have gone left and ended up half-stepping down the hill with the crowd to the escalator and made it back to the car in about 15 minutes. 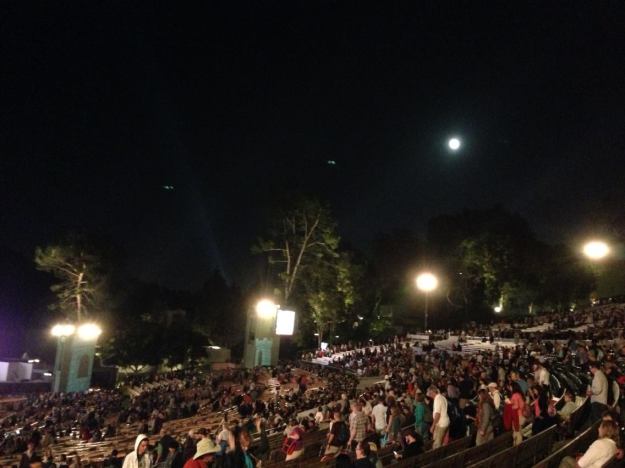 It was warm and humid all night, so by the time we got back to our parking space I was really looking forward to going home and taking a shower. (and yes, my shower was really refreshing later after midnight…)

They stacked parked the cars (unnecessarily) for this performance, so it required a little maneuvering to exit the lot. Traffic is always tough after a full house, but we were able to get back to the freeway and headed home in a reasonable amount of time without too much trouble. A wonderful evening, a nice picnic and a great show. Huzzah!

And the week before we went to

“A Midsummer Night” at the Hollywood Bowl

Tuesday night and we had great Box Seats with Gustavo Dudamel and the Los Angeles Philharmonic Orchestra playing Mendelssohn on a warm summer night in July!

Terrible traffic on the 101 freeway from the San Fernando Valley to Hollywood. The price of Parking at the Hollywood Bowl has increased $2 this year from $18 to $20 per car.

TIP: GO EARLY! Traffic is always unpredictable, but you can bet it will take at least 20 minutes to get past the light coming off the 101 freeway at Cahuenga and Highland. Provide extra travel time for walking uphill, bag check, ticket turn stalls, refreshments, restrooms and managing your picnic dinner.

NOTE: It is really bad form to arrive 5 minutes AFTER the performance begins and then start your meal! Finish eating before the Star Spangled Banner (snacks and beverages are acceptable during, but avoid any packaging that makes noise. Wait for intermission if you need to have that dessert! And please don’t set up your picnic blanket in front of the restrooms (seriously, they were sitting on the concrete in front of the restroom doors!). 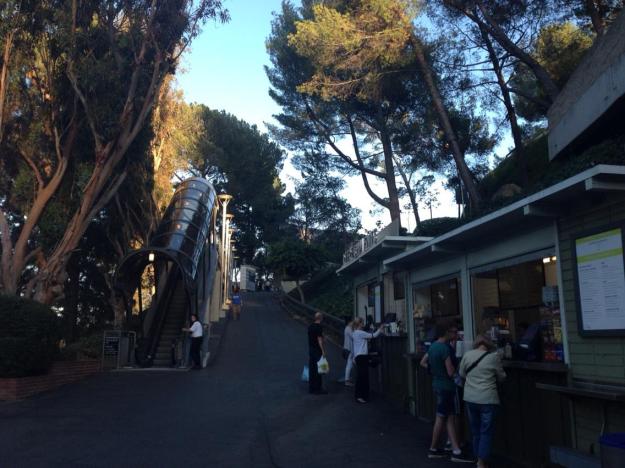 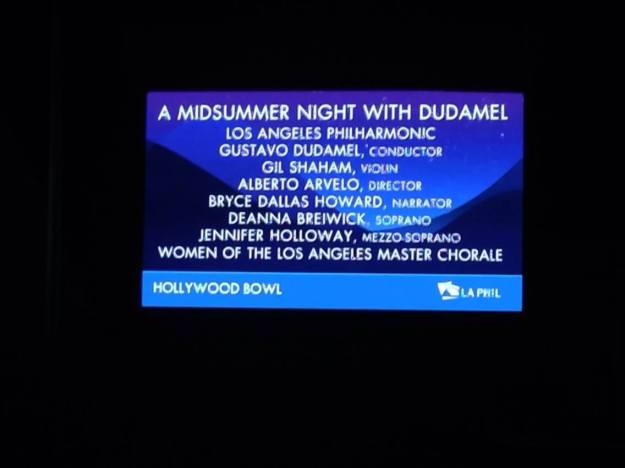 Dinner in the Box Seats is great because they provide removable folding tables, trash service and if you choose, expensive catered food delivered directly to your Box.

We ordered from Amer’s Mediterranean restaurant in Encino and picked up our “to go” food on the way. They recently changed ownership again, and the menu changed too. We also packed in our own beverages (advisable at events when they’re permitted) and also brought dessert and ice. The only refreshments we bought were a couple bad cups of coffee at intermission.

Picnic at the Hollywood Bowl – Middle Eastern: the wrong order!

Picnic at the Hollywood Bowl – Cheesecake for dessert!

On the Menu: Middle eastern food, it was supposed to be an “Amer’s Special” shwarma meat with hummus, tabouli, rice, falafel and pita bread. They screwed up the order. I hate beets. They gave us a “mixed grill” with chicken and ground beef kebabs. And they forgot the rice and falafel. At least there was good cheesecake for dessert.

The first act was Mendelssohn’s Violin Concerto in E minor with an exceptional performance by Gil Shaham on violin. The second act was “Midsummer Night’s Dream” accompanied by dramatic Shakespearean readings by Bryce Dallas Howard, and guest vocal performances by Deanna Breiwick and Jennifer Holloway with the Women of Los Angeles Master Chorale. It was beautiful.

The lighting and inspired projections enhanced the wonderful musical performance. The first act was better than the second, and I thought it was a little weird to hear the wedding march played as a classical piece in concert. There was also a lot of noticeable cricket noise during the quiet parts of the show, which I found distracting during the second act.

I thoroughly enjoyed the show! What’s not to like about Tuesday night at the Bowl with Dudamel and the LA Phil? It was a real good time.

Our box was positioned close to the exit, so we were out of there fast. We quickly traveled the long walk to the car and made a fast getaway from the parking lot and onto the 101 freeway home.

The Hollywood Bowl is a great venue! And once you know the “procedure” and tricks to traffic, parking and picnicking it’s a very pleasant experience. I’m looking forward to seeing more shows at the Bowl this summer. 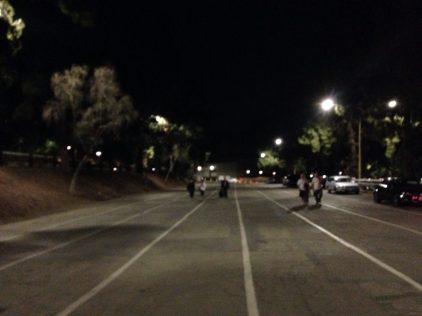 All Photos copyright 2015 JoshWillTravel (except the Cast Press Photos)