Kobe Bryant, his daughter Gigi, and seven other people, including the pilot, were killed in a helicopter crash on Sunday, January 26, 2020 in Calabasas, California. The cause of the accident is most likely pilot error due to the foggy weather. Reports say they were traveling to a girl’s basketball game in Thousand Oaks when the helicopter crashed. 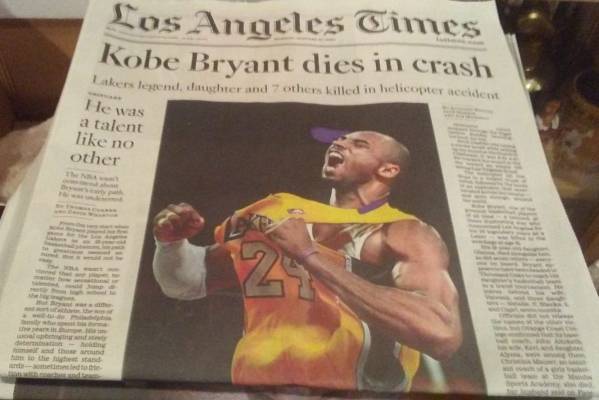 Kobe Bryant joined the National Basketball Association (NBA) after high school, and was a Los Angeles Lakers his entire 20 season professional basketball career.
He will be inducted into the NBA Hall of Fame posthumously this year.

Ara Zobayan, the instrument certified helicopter pilot earned his commercial pilot’s license in 2007. He was also a certified flight instructor for instrument instruction.

The Los Angeles Sheriffs Department has been using ATVs and horse mounted officers to protect the site from trophy seekers. The bodies were collected and delivered to the families. The wreckage was mapped by NTSB drones and investigators on the ground, then collected and transported to a yard in Arizona for forensic examination.

There have been non-stop tributes, vigils, and memorials,
as well as wall-to-wall worldwide media coverage.
The Grammy Awards at Staples Center on Sunday was basically a memorial service.
The entire City of Los Angeles and every Lakers fan have been in mourning all week.
The Los Angeles Kings hockey team and Los Angeles Clippers basketball team have honored him. And there will be another huge tribute at Super Bowl 54 on Sunday too.

Downtown Los Angeles (not my pic)

All photos are used for educational purposes and without any commercial intent.

Watching the floor crew as they lay the “playoffs” decal on the parquet floor.