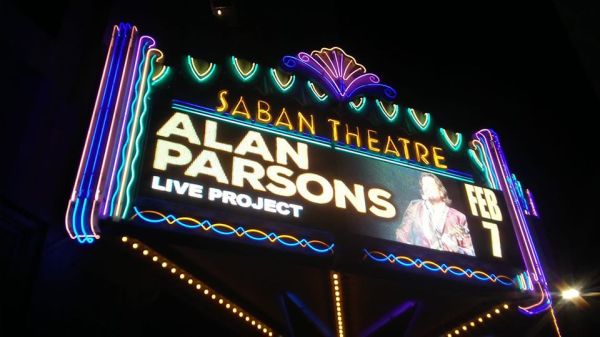 In 2018 Alan Parsons received the Grammy award for Best Immersive Audio Album after being previously nominated 13 times! And they also played at Burning Man! The band opened with about 50 minutes of hits and performed the entire album “I, Robot”, finishing up with an encore at Reverbia camp.

And so, because we missed them at Burning Man, we bought a ticket to the show!
Our original ticket was for the front row of the Mezzanine, and they were upgrading tickets because it was far from a sellout show. At first, we declined the upgraded ticket, but when we got to our seat, the band’s photographer was setting up a video camera directly in front of where we’d be sitting. So we found the General Manager and he gave us a good ticket in the Orchestra section (Row B). 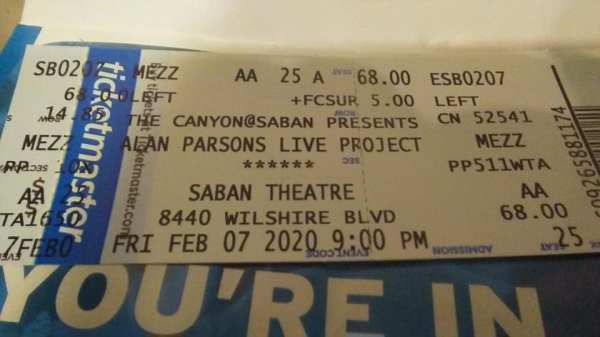 The seat was excellent, and the seats on both sides were empty, so no stranger’s elbows, knees or other physical intrusions to contend with. And sitting right behind us was invited celebrity Adam Carolla (from KROQ radio, “The Man Show”, “Crankyankers”, “Loveline”, and his famous podcast) and his friend who was “with the band.”
NOTE: the friend was “Chatty Cathy” all through the show giving Adam a running commentary on the music, the band, and his connections…. luckily the music was loud enough that it pretty much drowned out their conversation. It was cool when Alan Parsons dedicated and played the song “La Sagrada Familia” during the show per Adam Corolla’s request and gave him a shout out.  Adam yells “YOU’RE WELCOME BITCHES!” 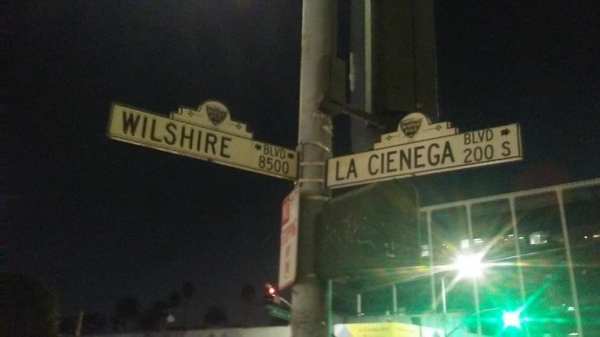 “How do you get to Vilshire?”

“Is that you John Wayne?” or is it Larry Flynt?
It’s the John Wayne statue in front of the 10 story oval shaped bronze colored Flynt Building at 8484 Wilshire Blvd and La Cienega Blvd in Beverly Hills, 90210. The land was once a miniature golf course owned by Mary Pickford in the 1930’s. Built in 1972, it was originally the Great Western Savings Bank building, and John Wayne was their TV pitchman. When he died in 1979 they erected the cowboy statue. Great Western sold the building to Larry Flynt and “Hustler” magazine in 1994 for $18.3 million, and then Flynt sold the building for $89 million in 2013 to the Douglas Emmett company, and signed a long term office lease with them. 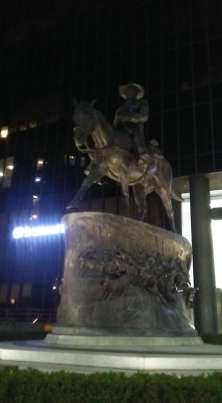 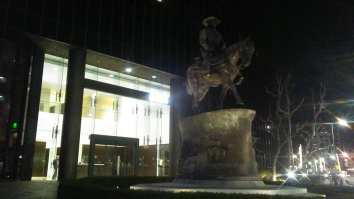 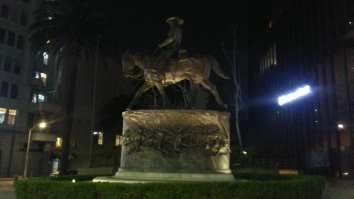 THE SABAN THEATRE – 8440 Wilshire Blvd, Beverly Hills 90210
The historic Art Deco Fox Wilshire Theatre was designed by architect S. Charles Lee and opened in September 1930. It was a 2500 seat movie palace with a stage for performance. In 1981 it was converted to a performance venue and in 2009 it was renamed the Saban Theatre (after a $5 million dollar grant from Haim and Cheryl Saban). The Temple of the Arts, a Jewish religious organization, has owned and operated the building since 2005. The building is on the National and State Registry of Historic Places and has also been designated a Beverly Hills Landmark. The lighting, sound, and event space was redone and the theatre now seats ~2000 people in the orchestra, mezzanine and balcony.

You Have Been Warned! 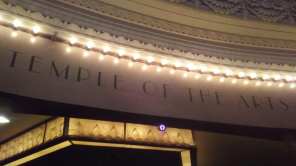 We arrived early and found metered street parking on La Cienega close to Wilshire! The meters weren’t active so we parked for FREE! We walked two blocks to the Saban Theatre and picked up our ticket at WillCall. There weren’t a lot of people out front, just people stopping before going in, and a couple of guys looking for a ticket to the show…. but it wasn’t sold out, so it wasn’t quite clear why they were looking for tickets.

We went inside, cleared Security and the metal detectors, and entered the beautiful rotunda lobby. Beer and wine bar on the left, merchandise booth on the right, hard alcohol bar straight ahead, and Men’s room upstairs. We checked out the space, bought a small bottled water for $3.00 and used the restroom upstairs before it got busy. We also went to our seat in the Mezzanine and scoped out the Balcony while we were upstairs, and that’s when we encountered the band’s photographer. So we went downstairs, spoke with the Manager, and then went to our new seat in the Orchestra.

It’s a beautiful proscenium arch theatre that’s been restored to reflect the original design by S. Charles Lee while being adapted for modern concerts and Broadway shows. The Art Deco interior was lit with purple and blue lighting to enhance the complex design details. 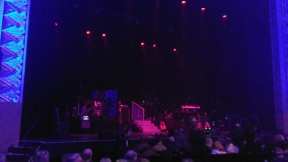 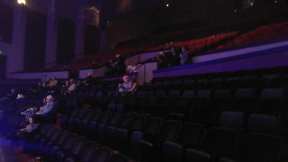 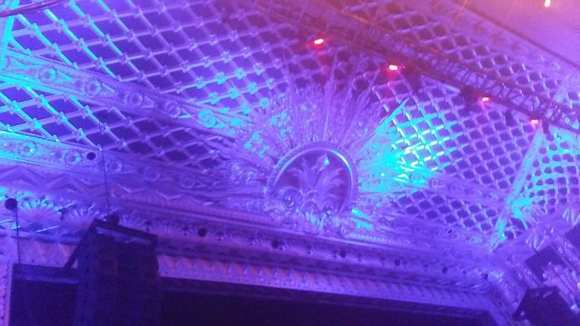 THE SHOW!
Started at a little late after 9pm and they played a fantastic 45 minute long first set. There was half hour intermission and then they played another great hour long second set with encore. The show ended just before 11:30pm. 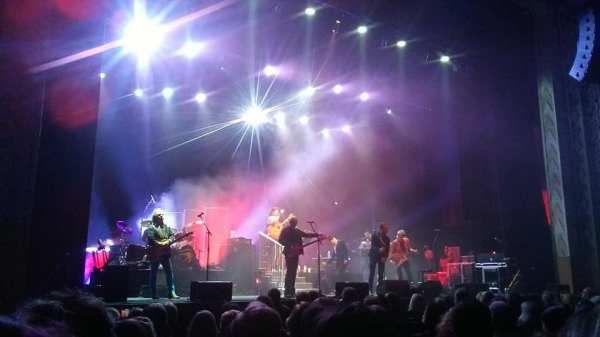 THE SET LIST:
(and with the exception of a few songs from “I, Robot”
it was pretty close to the show they played at Burning Man) 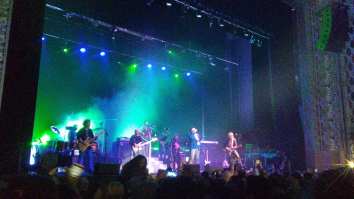 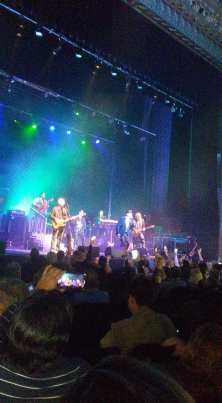 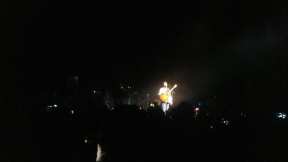 Such a talented group of gifted musicians! And they rocked! We had a conversation at Intermission with our seat neighbor about how good the band was, how some classic bands just don’t have it anymore, and how this was not the case with Alan Parsons. And the technical aspects of the show were also terrific. They had a great sound system and a good light show, but of course the music was the star of the show.

They are touring in support of their new music “The Secret” available on all formats now. 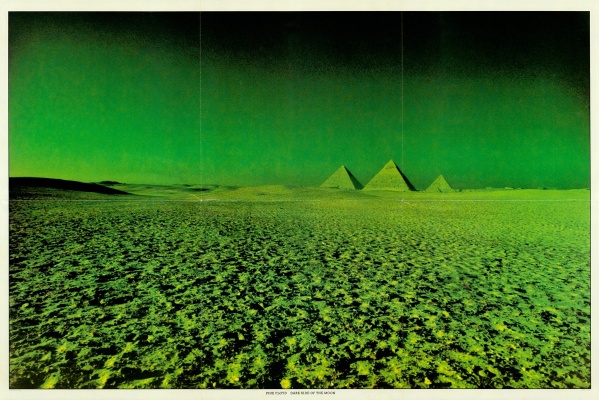 Pink Floyd – “Dark Side of the Moon”

Alan Parsons is headlining at the High End Hi-Fi Show in Munich, Germany in May! 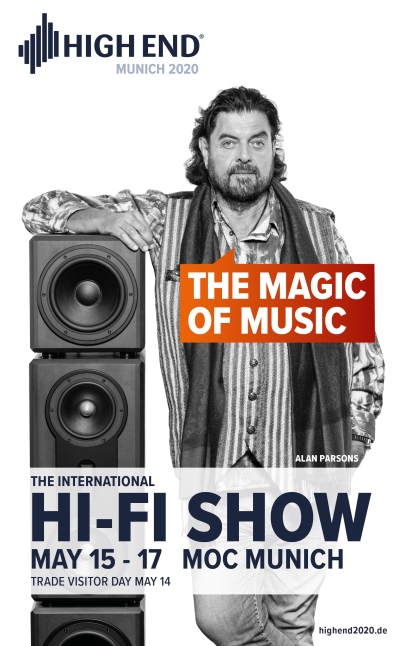