“I dream of Jeanie with the light brown hair… Borne, like a vapor on the summer air!”
– “Jeannie With The Light Brown Hair” by Stephen C. Foster 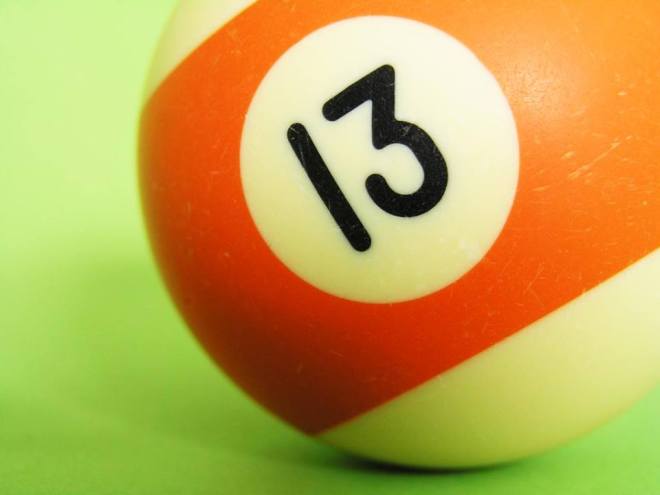 Friday the 13th is considered an unlucky day in Western superstition.

Friday, October 13, 1307: To free himself from his debts, Philip IV of France arrested hundreds of the Knights Templar. He tortured them into admitting heresy and then burned many of them at the stake.

The first documented mention of the day can be found in Henry Sutherland Edwards’ 1869 biography of Italian composer Gioachino Rossini (known for “The Barber of Seville” 1816 and “The William Tell Overture” 1829), who died on Friday, November 13th, 1868 in Paris, France:

“He was surrounded to the last by admiring friends; and if it be true that, like so many Italians, he regarded Fridays as an unlucky day and thirteen as an unlucky number, it is remarkable that on Friday 13th of November he passed away.”

“Friday the Thirteenth” a 1907 book written by American businessman Thomas Lawson, may have further perpetuated the superstition. In the story, an unscrupulous broker takes advantage of the superstition to create a Wall Street panic on Friday the 13th.

On “Black Friday” September 24, 1869 a failed plot to corner the market at the New York Gold Exchange and left many wealthy investors broke. Jay Gould and James Fisk (aka The Gold Ring) tried to buy as much gold as they could to drive up the price. The plot was discovered, President Ulysses S. Grant released $4 million worth of gold into the market, the price of gold dropped and the speculators were ruined.

Biblical origins: Jesus was crucified on Good Friday. There were 13 guests at the Last Supper the night before the crucifixion. Judas Iscariot, the apostle who betrayed Jesus, has been named as “the 13th guest”.

Norse mythology traces the superstition back to a story of a banquet at Valhalla where Loki, the demi god of mischief came unannounced as the 13th guest and caused chaos.

According to the Stress Management Center and Phobia Institute in Asheville, North Carolina,  17 to 21 million Americans suffer from Fear of Friday the 13th. Symptoms range from mild anxiety and a nagging sense of doom to full-blown panic attacks.

Many businesses (like airlines and casinos) suffer from severe losses on Friday the 13th. Most high-rise buildings, hotels and hospitals don’t have a “13th floor” and most airports avoid having gates with the number 13. In many countries, having 13 people at the dinner table is considered bad luck.

There will be another Friday the 13th this year (2017) in the month of October.

FULL MOON FRIDAY!
The “Wolf Moon” peaked at its full phase yesterday: Thursday, January 12 at 6:34am

Ask yourself: What did you want in 2016 but never found or accomplished?

Prepare for a new lunar month and year!
Take time to reflect on the past year under the clear light of the full moon.
Whatever your goals are, plan on how to get what you want most in this new year. 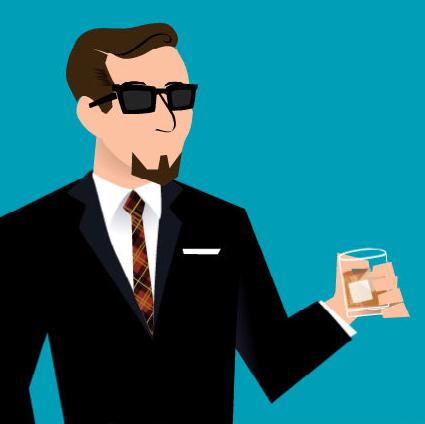 “Gwine to run all night! Gwine to run all day!
I’ll bet my money on de bob-tail nag. Somebody bet on de bay.”
– “De Camptown Races” (or “Gwine To Run All Night”) by Stephen C. Foster

Stephen C. Foster died on January 13, 1864 at the age of 37. Born on July 4, 1826 in Lawrenceville (now Pittsburgh), Pennsylvania. He is known as “The Father of American Music.” He wrote over 200 songs, primarily parlor and minstrel music, including “Oh! Susanna” (the anthem of the California Gold Rush) “Camptown Races” “My Old Kentucky Home” (became the official state song of Kentucky in 1928) “Old Folks at Home” (became the state song of Florida in 1935 and the lyrics were modified as the times changed) “Jeanie with the Light Brown Hair” “Old Black Joe” and “Beautiful Dreamer” (released after his death). Many of his songs had Southern themes, yet Foster never lived in the South and visited it only once in 1852. Three Hollywood films have been made of his life: “Harmony Lane” (1935), 20th Century Fox’s “Swanee River”  with Don Ameche (1939) and “I Dream of Jeanie” (1952). Stephen Foster Memorial Day is a United States Federal Observance Day according to Title 36 of the United States Code. It was made law in November of 1966 and was first celebrated in 1967.

And Al Jolson performs “Swanee” in George Gershwin’s “Rhapsody in Blue” in 1945:

Bing Crosby sings “Swanee River” from the film “Mississippi” in 1935:

Korean American Day #KoreanAmericanDay
Commemorates the arrival of the first Korean immigrants to the United States in 1903 and honors their contributions to American culture and society. President George W. Bush issued a proclamation on the 100th anniversary of the arrival of the first Korean immigrant in 2003. The U.S. House and Senate passed simple resolutions in support of Korean American Day in 2005.

The Flag of South Korea

National Peach Melba Day #NationalPeachMelbaDay
Peach Melba was invented in 1892 or 1893 by the French chef Auguste Escoffier while employed at the Savoy Hotel in London to honor the Australian soprano Nellie Melba. Made with peaches, vanilla ice cream, raspberry sauce and topped with spun sugar, the dessert was originally called “Pecheau Cygne” or “Peach Swan” and was served inside a swan-shaped ice sculpture. 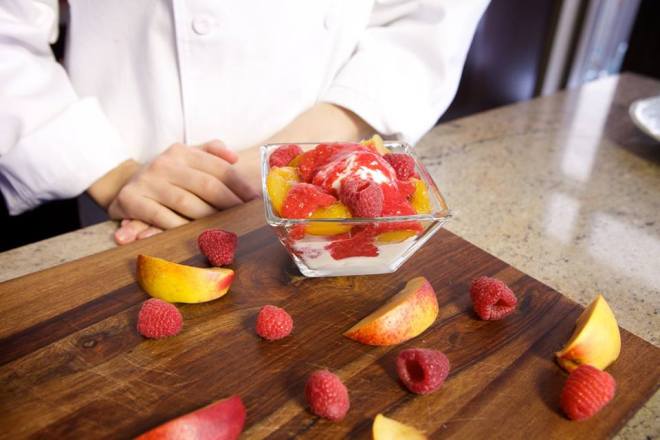 National Sticker Day #NationalStickerDay
R. Stanton Avery, born on January 13, 1907, was the original creator of the adhesive label with a removable backing.
National Blame Someone Else Day #BlameSomeoneElseDay
(always celebrated on the first Friday the 13th of the year)
and it’s
National Rubber Ducky Day #NationalRubberDuckyDay
(the earliest patent for a rubber duck toy was in 1928 by Landon Smart Lawrence)
Russian Sculptor Peter Ganine designed and patented a floating toy “uncapsizeable duck” in 1949 (US Patent 153426 & 153514, over 50,000,000 were sold) which closely resembles the rubber ducky we have today. The rubber ducky was inducted into the New York Toy Hall of Fame in 2013 (founded in 1998, the New York Toy Hall of Fame has only inducted 52 other toys). According to a 1973 “Sesame Street” calendar, Rubber Duckie’s Birthday is on January 13. Duckie made his debut in a February 1970 episode.

And as of yesterday the San Diego Chargers are now the Los Angeles Chargers!

Monday is a HOLIDAY!

From the King Center website (www.kingcenter.org):
“On this day we commemorate Dr. King’s great dream of a vibrant, multiracial nation united in justice, peace and reconciliation; a nation that has a place at the table for children of every race and room at the inn for every needy child. We are called on this holiday, not merely to honor, but to celebrate the values of equality, tolerance and interracial sister and brotherhood he so compellingly expressed in his great dream for America.”

MLK’s “I HAVE A DREAM” Speech
Delivered on August 28, 1963 at the March on Washington for Jobs and Freedom from the steps of the Lincoln Memorial in Washington, D.C to over 250,000 people on the National Mall. the speech was originally written as a homage to Abraham Lincoln’s Gettysburg Address, and was timed to correspond with the 100-year centennial of the Emancipation Proclamation. 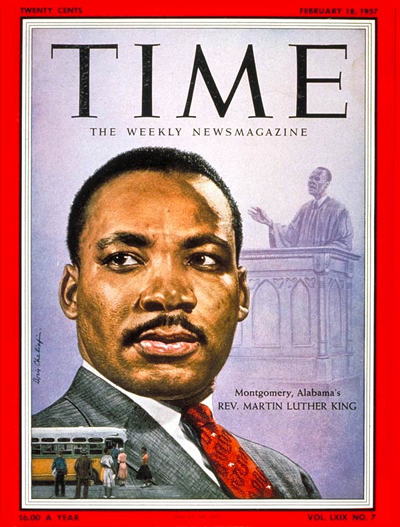 NOTE: Martin Luther King Jr. was named “Man of the Year” by TIME magazine in 1963, and was the youngest person ever awarded the Nobel Peace Prize in 1964. The full speech did not appear in writing until August 1983, 15 years after his death, when a transcript was published in The Washington Post. The Library of Congress added the speech to the United States National Recording Registry in 2002. The National Park Service dedicated an inscribed marble pedestal to commemorate the speech at the Lincoln Memorial in 2003.

Coming soon! THE YEAR OF THE RED FIRE ROOSTER
The first day of Chinese New Year is Saturday, January 28, 2017. 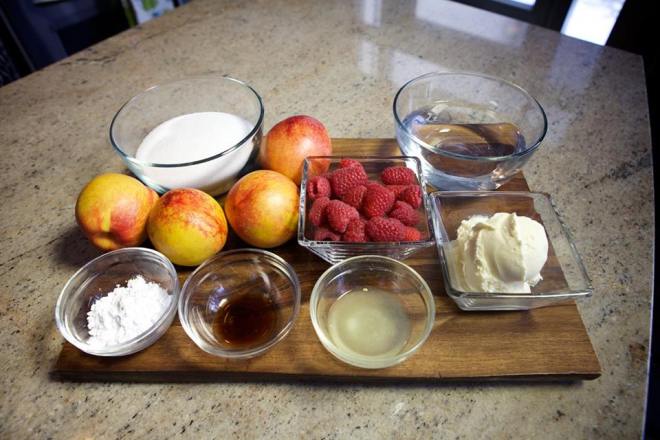 Instructions:
1. Combine water, sugar, lemon juice and vanilla extract in a large saucepan. Heat on low until sugar has dissolved. Increase heat to medium and bring to a boil. Cook at boiling for about 3 minutes and then return to simmer.
2. Cut the peaches in half. Place in the sugar syrup and poach about 2 to 3 minutes per side. Test with a knife to determine if they are done and when finished poaching, place them on a plate to cool.
3. After the peaches have cooled, peel off the skin and remove the pits.
4. For raspberry sauce: combine all ingredients in a food processor or blender and puree until very smooth. Strain through a colander and into a bowl.
5. Assemble the dessert by placing 2 peach halves in a bowl along with a scoop of ice cream. Spoon raspberry sauce on top and serve immediately.

Happy National Rubber Ducky Day!
Dutch artist Florentijn Hofman created a series of giant floating rubber ducks in 2007.
The ducks ranged in size and appeared in 25 cities around the world. 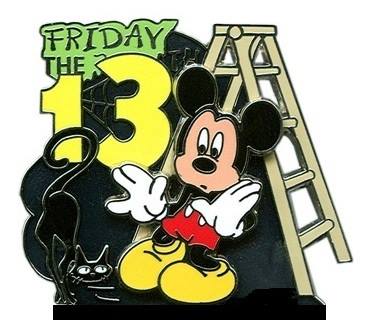