Tuesday night in Los Angeles? How about a concert at the Hollywood Bowl?

Arrive Very Early! Get parking or take the Shuttle, Allow plenty of time and avoid the rush. Don’t be the latecomer just starting your picnic when the concert starts! Proper Hollywood Bowl etiquette is FINISH your dinner BEFORE the start of the show! 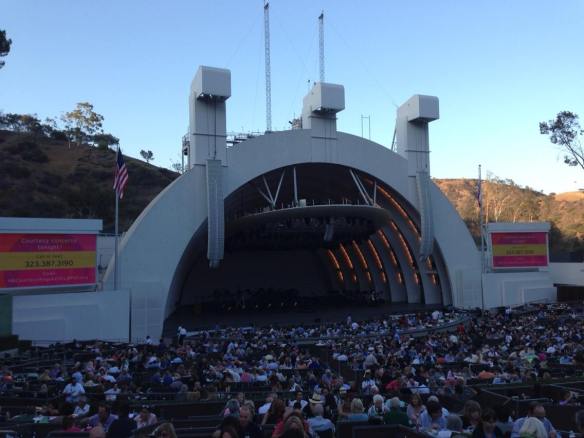 We had Box Seats and brought a picnic dinner. The boxes are nice because they provide a fold-down table for dining which they will remove before the concert begins. Two things about dining in the box: you’ll be at a different level than your table partner because of the raked theater seating and the boxes are tight and a little close quarters. It can be difficult to maneuver, but the canvas seats in the boxes are so much better than the benches (even with a cushion). Note: They recently replaced all the old wood benches with new stadium benches, and there are also a couple non-box sections with stadium seating.

The Hollywood Bowl is fully accessible for guests with special needs, just be aware of the steep hillside terrain and large crowds that can at times be difficult to navigate.

The best dining option at the Hollywood Bowl is to bring your own picnic dinner. They even let you bring wine, beer, and other beverages for the classical concerts, but you should always check because they have restriction and are pretty strict about them at the rock and family events, and at big events where they are selling alcohol.

They also have a sit down outdoor patio restaurant, Patina at the Bowl, but you’ll need a reservation in advance! And they have concession stands that serve overpriced snack food and drinks, alcohol service varies.

TIP: You can park and picnic at the Ford Theatre across Highland when they don’t have a conflicting event. Or, the best place to picnic is at the top of the Bowl! Ride the escalators all the way up to the picnic area with tables, benches, and a great view of the city. Seating is first come, first served so arrive early and allow time for parking, walking and dining!

We like to bring too much food and take home the leftovers. It’s also nice because you can share your food with total strangers while you picnic. We ordered dinner from California Mediterranean Cafe and packed the sides, dessert and beverages from home. As I mentioned dining in the box can be difficult, but after going to the Bowl for years, it’s a practiced affair. Dinner was good. I was hungry. We finished eating, and put the food away.  They took away the garbage and the folding tables as the orchestra was tuning up.

Every show at the Hollywood Bowl begins with “The Star Spangled Banner”, and it’s okay to sing along, most people do it badly…

The program was Joshua Bell & Friends: 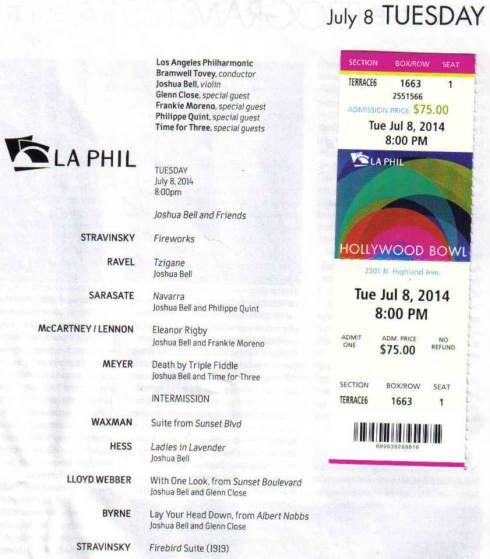 The weather was perfect. Not hot, nice breeze, not too cold. Perfect. The concert was good. A little too much “slow sleepy music” and not enough flourish on the pieces. The L.A. Philharmonic Orchestra is always great! The choice of the pieces and the flow of the show was a little “jerky”. Glenn Close singing two of the pieces was a nice touch, the Eleanor Rigby with Frankie Moreno from Vegas was different but very entertaining, and the quartet with Joshua Bell and Time for Three was just plain cool. The classical pieces were played and conducted well and the concert was very enjoyable. 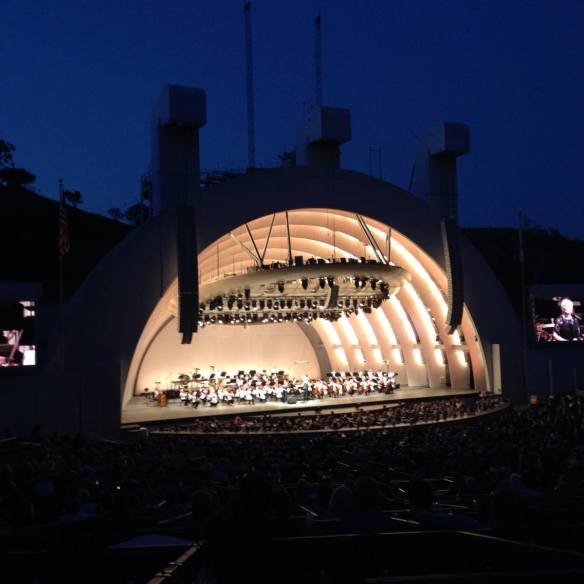