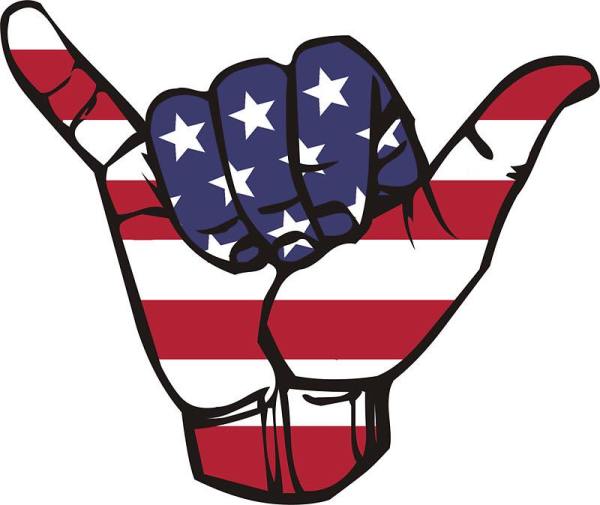 CELEBRATE FREEDOM AND LIBERTY!
Remember those who don’t have theirs.

And we passed 70000 unsolicited hits on this Blog last week! 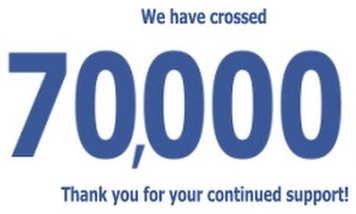 See our previous Blog Posts for our past 4th of July Blog Posts! 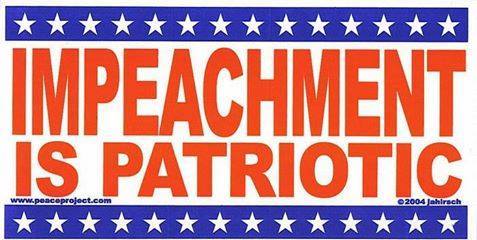 “Be Safe Out There!”

Friday, February 16 is the Beginning of the Lunar New Year & Spring Festival

The Lantern Festival is on March 2nd and is the climax of the new year celebration.

Over 2000 years old, the Lantern Festival is a time for Moon watching, Lion dances, lantern lighting, social interaction and a celebration of freedom.

2018 is time to overcome obstacles and will be a challenge year for many people.
Take extra effort to reach your destination and use your wisdom to find a better way.
Consider necessity before spending money.
2018 will be a good year to save and increase your wealth. 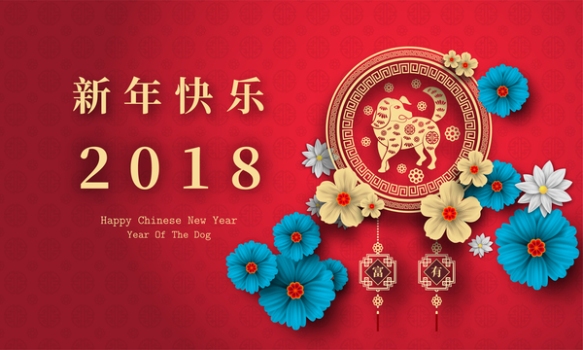 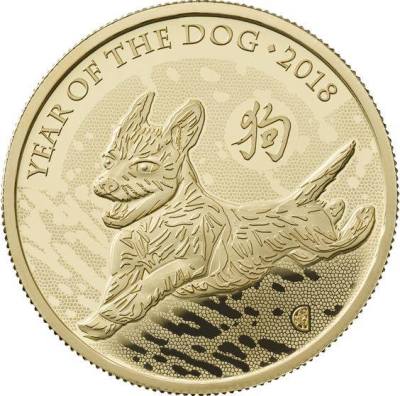 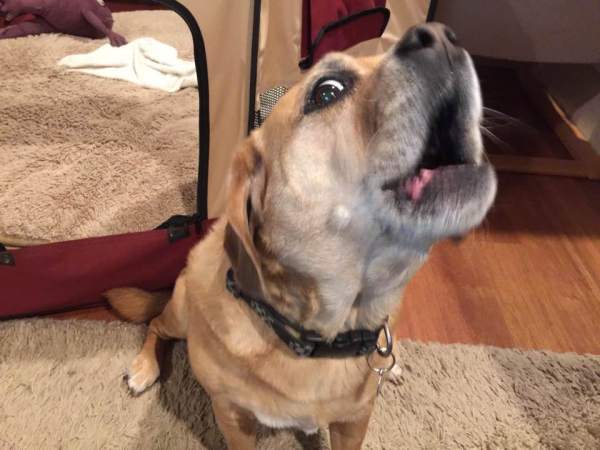 “America is great because she is good.
If America ceases to be good,
America will cease to be great.” – Alexis De Tocqueville 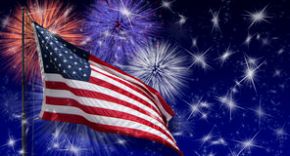 Have a Celebration! Wave that Flag! Have a SAFE Holiday!

Time to BBQ, Party, Celebrate, Watch Fireworks and Have a Real Good Time!

“So, then, to every man his chance – to every man, regardless of his birth, his shining, golden opportunity – to every man the right to live, to work, to be himself, and to become whatever thing his manhood and his vision can combine to make him – this, seeker, is the promise of America.” – Thomas Wolfe

“America! What a country!” – Yakov Smirnoff in “Brewster’s Millions”

“The bosom of America is open to receive not only the Opulent and respectable Stranger, but the oppressed and persecuted of all Nations and Religions; whom we shall welcome to a participation of all our rights and privileges, if by decency and propriety of conduct they appear to merit the enjoyment.” – George Washington

4th of July Fireworks at the Hollywood Bowl!

“In America, anyone can become President.
That’s the problem” – George Carlin RIP

“We should keep steadily before our minds the fact that Americanism is a question of principle, of purpose, of idealism, of character; that it is not a matter of birthplace, or creed, or line of descent.” – Theodore Roosevelt

“Wave that flag, wave it wide and high!
Summertime done come and gone, my oh my!” – Grateful Dead “U.S. Blues” 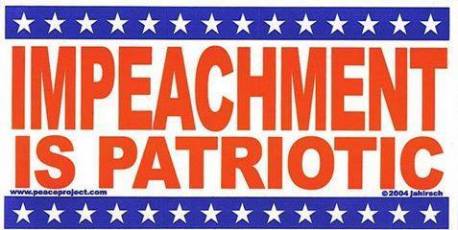 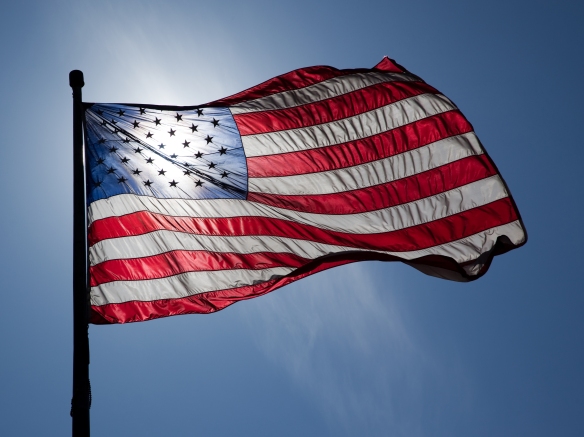 USA! “Old Glory” The Flag of the United States of America!

On Saturday, the United States of America will celebrate its 239th birthday!

Have a safe holiday weekend! 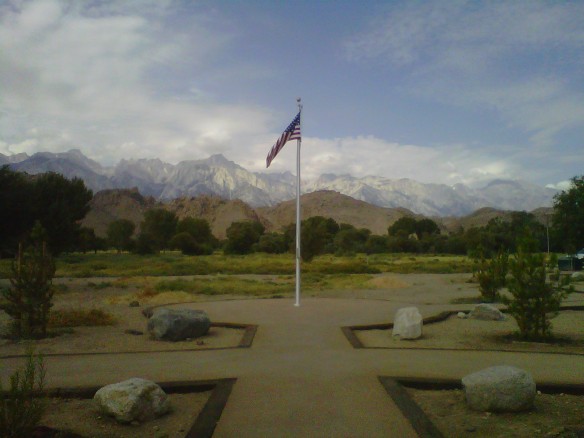 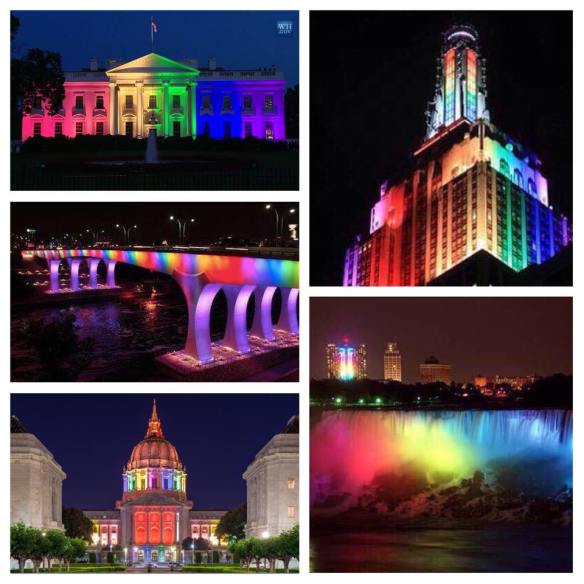 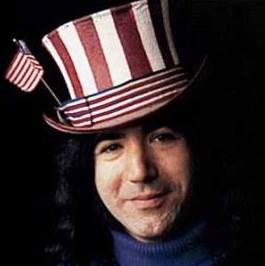 Stay the Course (close up)

WARNING: I’m going to talk politics, civil rights, racism, police brutality, abuse of power, abuse of power under color of authority, murder, First Amendment, and personal freedom in this post. If you don’t like it. Don’t read it.

GRAPHIC IMAGE! African-American Teenager Michael Brown Killed by Caucasian Police Officer in Ferguson, Missouri. (Do you think this image should be censored on CNN?) 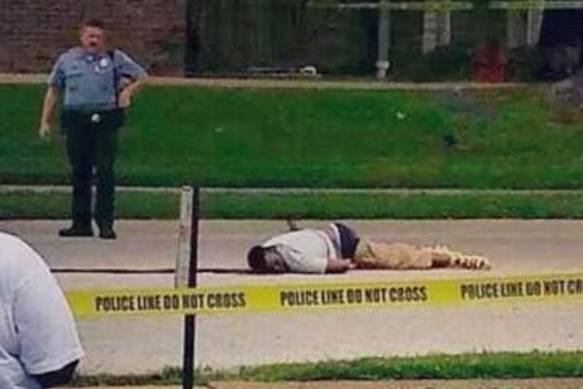 Michael Brown killed by Police lays dead in the street in Ferguson, Missouri

All men (and women) are created equal.
The Constitution, the First Amendment and Personal Freedom are under attack!

“We the People of the United States, in Order to form a more perfect Union, establish Justice, insure domestic Tranquility, provide for the common defence, promote the general Welfare, and secure the Blessings of Liberty to ourselves and our Posterity, do ordain and establish this Constitution for the United States of America.” – the Preamble of the Constitution

I learned from the last presidential election, that sharing politics on the internet is a good way to lose “friends” and “followers” who might not align with the politics that are shared.

However, as I followed the events in Ferguson, Missouri yesterday and into the night, I was left asking WHAT HAS HAPPENED TO THE UNITED STATES OF AMERICA?

The First Amendment of the Constitution prohibits any law abridging freedom of speech, infringing on freedom of the press, interfering with right to peaceably assemble or prohibiting petitioning for a redress of grievances. (and there’s also something about religion too)

“Article I – Congress shall make no law respecting an establishment of religion, or prohibiting the free exercise thereof; or abridging the freedom of speech, or of the press; or the right of the people peaceably to assemble, and to petition the Government for a redress of grievances.” (The First Amendment)

I watched racist police in camouflage uniforms and body armor attack unarmed protesters and journalists. They were teargassed, fired at with rubber bullets, attacked with high tech military weapons, intimidated by heavily armed police, assaulted and arrested for recording the strong-arm tactics and activities of law enforcement.

Missouri and St. Louis County, your police stormtrooper tactics are a national disgrace!

From the Washington Post: reporter-wesley-lowery-gives-account-of-his-arrest: “As they took me into custody, the officers slammed me into a soda machine, at one point setting off the Coke dispenser. They put plastic cuffs on me, then they led me out the door.”

The mainstream television news media was absent and the reports from network news was skewed, twisted and voiced without knowledge of the actual facts. Only MSNBC was present on the scene and providing live coverage. While the network morning shows were featuring weather, traffic, diet advice and Anne Hathaway and CNN and FOX were bending the truth, MSNBC was providing a factual accounting of POLICE ABUSE IN AMERICA.

And while journalists were ordered out of the area, attacked, assaulted and arrested, reports and video were coming in real time on Twitter and Livestream showing the truth.

The iPhone is mightier than the corporate news media! Thank you MSNBC and Twitter.

Militarization of the Modern Police State – 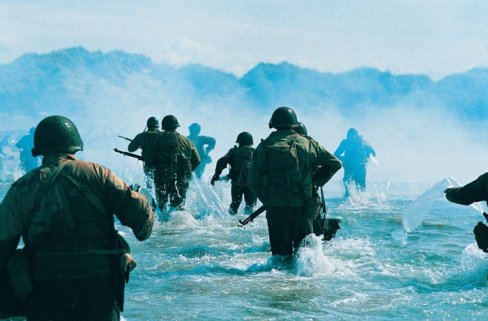 It’s D-Day! Today is the 70th Anniversary of the Invasion of Normandy!

Operation Overlord was the name assigned to the invasion of the Continent. The Normandy landing was the first phase, codenamed Operation Neptune, and the amphibious attack was the largest seaborne invasion in history. The operation began the Allied invasion of German-occupied western Europe, the establishment of a beachhead on the European continent, and it eventually led to the defeat of Nazi Germany and the end of World War II.

D-Day! A Military Map of the Normandy Invasion Area in France

Remember the Veterans of all our wars today.

At Omaha Beach, part of the Mulberry Harbour B is still visible in the sea at Arromanches, a few beach obstacles remain, and the Longues-sur-Mer battery is nearby. A memorial to the American National Guard sits at the location of a former German strongpoint. Pointe du Hoc is little changed from 1944, with the terrain covered with bomb craters and most of the concrete bunkers still in place. The Normandy American Cemetery and Memorial is in Colleville-sur-Mer. Museums are located at Sainte-Marie-du-Mont, and Sainte-Mère-Église. Two German military cemeteries are also located nearby. The Juno Beach Centre, opened in 2003, was funded by the Canadian federal and provincial governments, France, and Canadian veterans. Pegasus Bridge, a target of the British 6th Airborne, was the site of some of the earliest action of the Normandy landings. The bridge was replaced in 1994 by one similar in appearance, and the original is now housed on the grounds of a nearby museum complex. 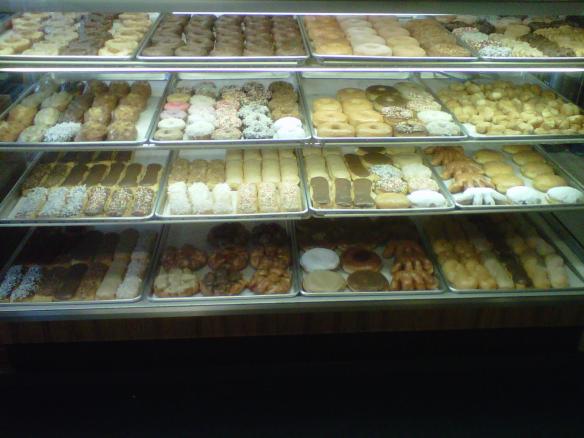 The first Friday of June each year is also National Donut Day! Originally created by The Salvation Army in 1938 to honor the men and women who served doughnuts to soldiers during World War I, you can get a FREE DONUT most places today! 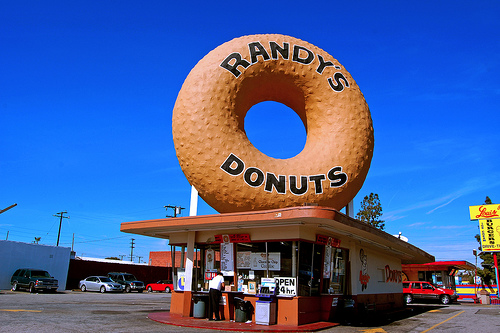 FREE!!! (the word of the day and today is Friday) 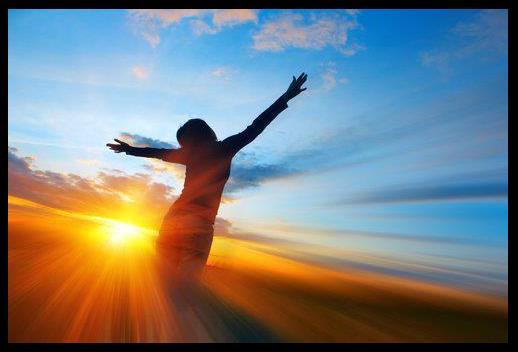 1. ENJOYING PERSONAL RIGHTS OR LIBERTY
2. pertaining to or reserved for those who enjoy personal liberty
3. existing under, characterized by, or possessing civil and political liberties
4. enjoying political independence
5. exempt from external authority, interference, restriction, etc.; independent, unfettered
6. able to do something at will; at liberty
7. not subject to special regulations, restrictions, duties, etc.
8. NOT SUBJECT TO RULES, set forms, etc.
9. clear of obstructions or obstacles
10. not occupied or in use 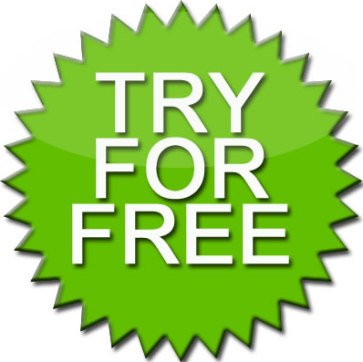 11. exempt or released from something specified that controls, restraints, burdens, etc.
12. having immunity or being safe
13. that may be used by or is open to all
14. engaged in by all present
15. unimpeded, as motion or movement
16. loose, not held fast; unattached
17. not joined to or in contact with something else
18. frank and open; unconstrained or familiar
19. unrestrained by decency, loose and licentious 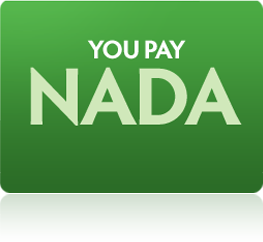 20. ready in giving; liberal; lavish
21. given readily or in profusion; unstinted
22. given without consideration of a return, as a gift
23. PROVIDED WITHOUT, OR NOT SUBJECT TO, A CHARGE OR PAYMENT

24. at liberty to enter and enjoy at will
25. traveling without power; under no force except that of gravity or inertia
26. WITHOUT COST OR CHARGE
27. to exempt or deliver
28. to relieve or rid
29. to disengage; clear

TGIF! Have a great and safe Memorial Day Weekend!

This day in History. Remember the Veterans of all our wars today. 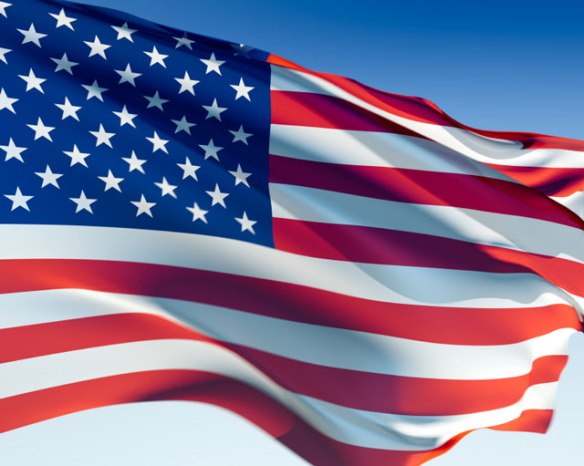 The Flag of the United States of America 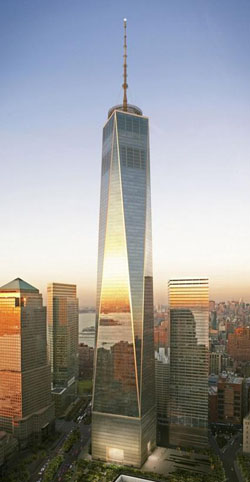 The Flag of the United States of America – “Don’t mess with the U.S.!”