My dogs and a couple guests Friday morning chillin’ on the backyard patio:

What time does the poker game start?

Woke up and got out of bed. We had bacon, grapefruit, a glass of orange-pineapple juice and an iced espresso for breakfast, and then a dill pickle, some tortilla chips and another iced espresso later on.

Social Media Time! Set up this Blog and worked on our other Social Media platforms, went through the emails and did other stuff in the Home Office until lunchtime.

NOTE: We are now back on SnapChat! @JoshWillTravel

We made a cheese quesadilla for lunch. It was quick and filling.

Dropped one of the dogs off at the pet groomer and then ran some local errands.

It’s National Donut Day 2016 in the USA! (see our previous Blog)
We went to get some donuts…

We stopped at Dunkin’ Donuts and there was a parking spot in front, but then when we got out of the car and walked over, the line was out the door! 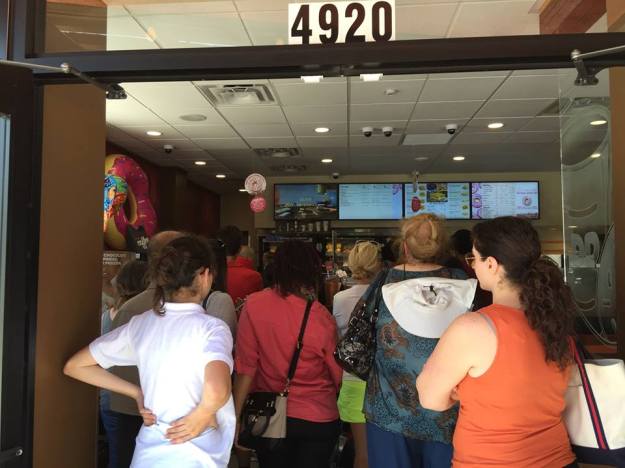 LUNCHTIME RUSH! No Progress after 10 Minutes! Time to Bail!

We waited for about ten minutes without making progress or getting inside the doorway of the donut shop, so we bailed! Not very well managed if you ask me, offering a free donut with beverage purchase, and knowing there would be a rush at lunchtime…

So we drove a few blocks north on Balboa Blvd to Stop In Donuts at Victory Blvd. There was a parking spot in front and a pan handler in the lot.

Stop In Donuts at Victory Blvd and Balboa Blvd in Encino, California

There wasn’t a line (in fact it was us and the owner and her daughter alone in the shop) and so we bought a bag of donuts! Five donuts: Cinnamon Roll, Apple Fritter, 2 cake with chocolate frosting and a chocolate glazed with sprinkles for $6.30 cash and then they gave us a half dozen donut holes for free! (but we had to ask) And in tribute to Mitch Hedberg…THEY DIDN’T GIVE US A RECEIPT! (and we didn’t ask for one) Thanks Stop In Donuts!

Bag of Donuts from Stop In Donuts in Encino, California

We went to the local Post Office. Then instead of running our other errands we returned home because the temperature was 100 degrees in the San Fernando Valley and we wanted to bring the other four dogs inside the house and out of the afternoon heat.

Time to EAT the Donuts! Five donuts: Cinnamon Roll, Apple Fritter, 2 cake with chocolate frosting and a chocolate glazed with sprinkles for $6.30 cash and then they gave me a half dozen donut holes for free (not pictured)

Siesta! Afternoon nap time! Too hot for humans or dogs outside!

We woke up from our nap and it was still hot outside. The other dog was returned home from the pet groomer looking pretty and smelling nice. 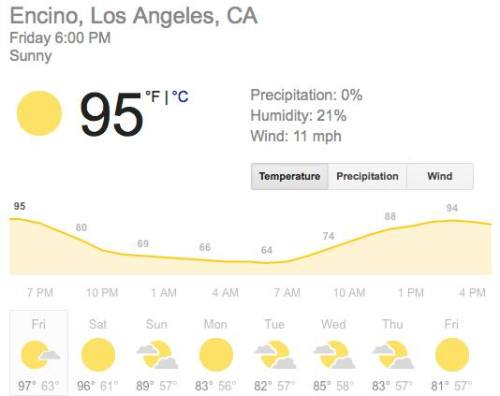 We fed the dogs, got ready to go out and then drove to NoHo. When we arrived there was food cooking on the grill! We drank a beer (Pabst Blue Ribbon) and waited for dinner time!

Texas BBQ Dinner in North Hollywood at a friend’s house: 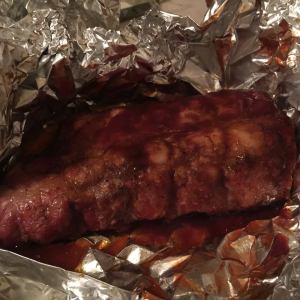 Beans on the Stove

On The Menu: Texas BBQ Baby Back Ribs, Beans, Bread and Butter with a Dr Pepper!

Dinner was a total surprise, and we weren’t expecting to eat so well. We didn’t eat until late, and then after a little post dinner digesting, we drove home.

And then we logged on to the internet around midnight and got the BAD NEWS:

Muhammed Ali RIP 1942-2016
He was The Greatest! Float like a Butterfly!
May the Four Winds Blow Him Safely Home.

This Pic Was Tweeted By The Family

Growing up, Muhammed Ali was THE SPORTS HERO! He was a black man in a white world who stood up for what he believed in. He was a great boxer! An Olympic Gold Medal Winner! The Heavyweight Champion of the World! He was a victim of Parkinson’s Disease. He changed the United States and the world!

Muhammed Ali lights the torch at the 1996 Olympic Games in Atlanta:

The California Presidential Primary Election is this Tuesday June 7, 2016
*Polls are OPEN 7am to 8pm* – GO VOTE! ONLY 3 DAYS TO GO!

SHUT THE F*CK UP DONNY!
DO NOT VOTE FOR TRUMP!

Jeb Bush had a good breakdown of everything that was wrong with Trump’s tweet: “It’s like eating a watermelon and saying ‘I love African-Americans”

Trump said this today at a rally in San Jose: “We had a case where we had an African-American guy who was a fan of mine….Look at my African-American over here. Look at him. Are you the greatest? You know what I’m talking about?”

Trump is a “Cheap Fraud!”
And federal judge Gonzalo Curiel, who Trump called “A Hater” and “we believe, Mexican” ordered the release of internal Trump University documents and also ordered that ‪‎Trump‬ will go to trial starting Nov. 28 in a civil case in which he is accused of defrauding students who attended. Former managers of ‬ the for-profit school portray it as an unscrupulous business that relied on high-pressure sales tactics, employed unqualified instructors, made deceptive claims and exploited vulnerable students willing to pay.

“I believe that Trump University was a fraudulent scheme,” Mr. Schnackenberg wrote in his testimony, “and that it preyed upon the elderly and uneducated to separate them from their money.”

Trump is a Liar and a Con Man who uses “Veterans as Props to Get Votes”
“For four months, Donald Trump‬ didn’t cut the check to veterans groups that he claimed he had, and had not raised the money he said he did. And he never would have, unless investigations by multiple outlets had exposed him.” Former US Marine Alexander McCoy organized a protest outside of Trump Tower, demanding that the billionaire “apologize for using Veterans as props to get votes while failing to keep his promises.” After weeks of media scrutiny about donations he promised to veterans groups, Trump held a news conference Tuesday. The Washington Post and the Associated Press reported Trump sent many of the checks after reporters began asking the campaign questions about the fate of the donations. The total also fell far short of the $6 million Trump had been bragging about.

First Amendment and The Constitution?
Trump insulted the Press during the news conference and ABC News’ Tom Llamas was branded a “sleaze” for asking about the gap between the $5.6 million and the $6 million in donations. His question: “You said you had raised $6 million. Clearly you had not. Your critics say you tend to exaggerate and have a problem with the truth.”

And a Trump campaign staffer and private security guard removed a Politico reporter from the San Jose rally on Thursday for reporting on the event without permission as violent demonstrations and protests erupted outside the venue. 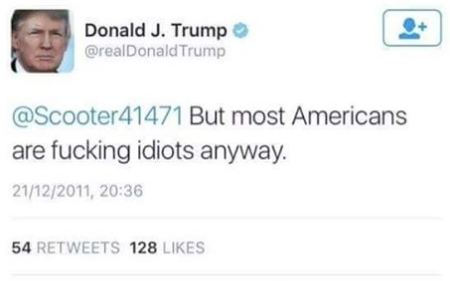 Here’s what Trump thinks of you!