So disappointed with the ustream feed! The Man burned Saturday night and as per my previous blog it was a total failure. I was hopeful the Temple Burn on Sunday would be better.  It wasn’t, it was worse.

First, the music on the audio stream was incredibly inappropriate! Temple burn is a solemn ceremony, and the DJ showed ZERO RESPECT! I can’t even express how disrespectful it was. The DJ was even asking for listeners on the playa to bring him “a tasty adult beverage” on air during the Temple burn.  I hope karma finds him for his massive failure.

Second, the camera was zoomed out and out of focus, and the Temple burn was a little orange spot, even on my large monitor. They should use some of that Silicon Valley money and invest in decent broadcast equipment, coverage, and trained operators. FOCUS!!!!!

Again, thanks to everyone who made the webcast happen, with the exception of a DJ previously mentioned, we really appreciate your effort, but unfortunately EPIC FAIL! (x2)

More Playa Pics: (here are a few more pics from this week on the interweb… ) 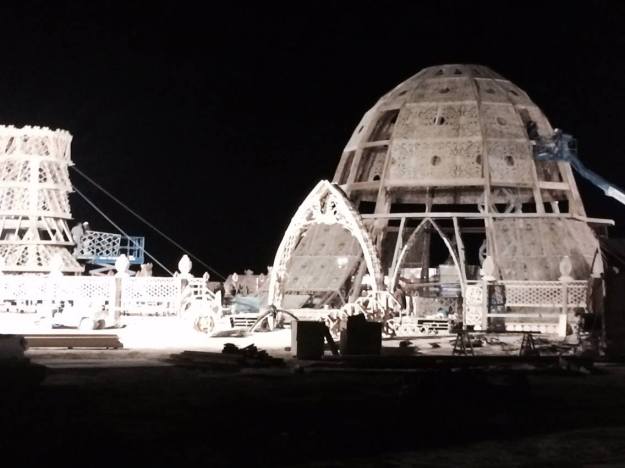 Burning Man 2014 – First Class Cooking for the Crew! (not vegan) 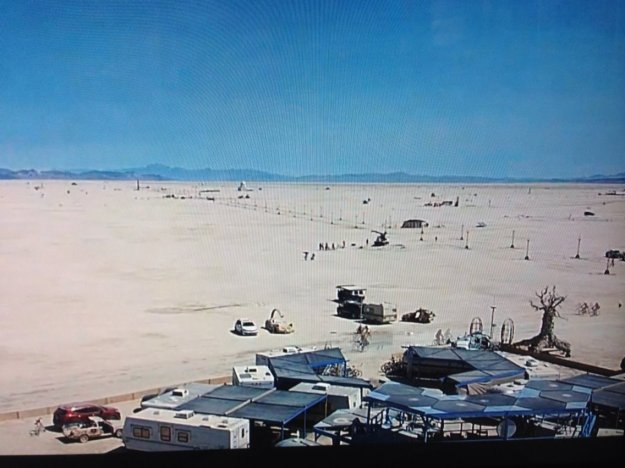 Burning Man 2014 – Monday after the exodus

Took the week off posting to the blog, but I’ve been armchair surfing the Burning Man Festival in the Nevada desert all week. Last night the Man burned, and smoldered, and smoked, and then finally fell.

Burning Man 2014 – Great Pic! The Man and “Embrace” silhouetted against the desert sky

THE USTREAM WEBCAST COVERAGE SUCKED HARD!!! (and “F*ck your day!” if you think otherwise) YES I’M A CRITIC! And I’m going to trash the Ustream cast.

Someone suggested that if I wanted better coverage I should go out to the desert. I don’t disagree, and it would be really cool to be there, but alas I’m stuck here in Los Angeles sharing the experience with about 14000 people online (at peak viewing) and the camera operator doesn’t know how to focus the HD camera. There were 100% Technical Problems including not enough bandwidth and choppy streaming, MAJOR AUDIO PROBLEMS, loss of picture, loss of stream, terrible picture in picture that distracted from the burn, ZERO CREATIVITY!, and terrible camera technique. Learn how to FOCUS!

BEST MOMENT: At one point the picture cut to the guy operating the stream, a bearded hipster in coveralls, he looked up from the keyboard and saw that he was live on the web, made a great “surprise” face and then immediately switched the stream back. I hope someone got a screen shot of the guy’s video selfie, so we can post it!

Okay, so there you go. thanks to everyone who made the webcast happen, we really appreciate your effort, but unfortunately EPIC FAIL! 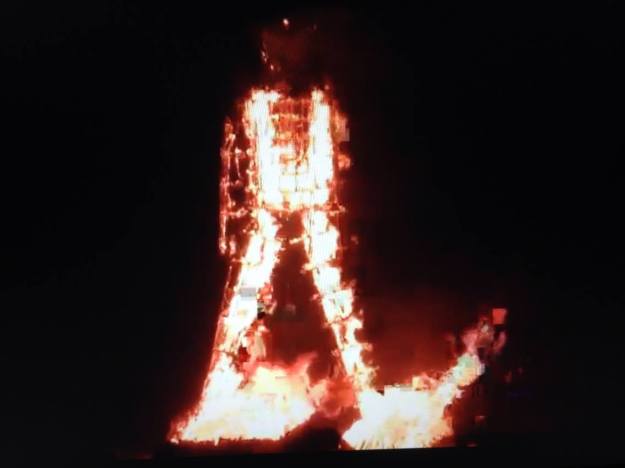 I watched the webcast and wasn’t the only person who thought the coverage sucked.

And here’s the big kicker: It took over an hour for The Man to burn. There were fireworks, and a great conflagration, and then another 45 minutes or more of “smoldering man”, “standing man” and “boring man” before the effigy actually collapsed.

A much better burn happened on Friday afternoon when they burned the “Embrace” art! There are great pictures and cool video online of the fire. Check it out!

So here are some more pics from this week: 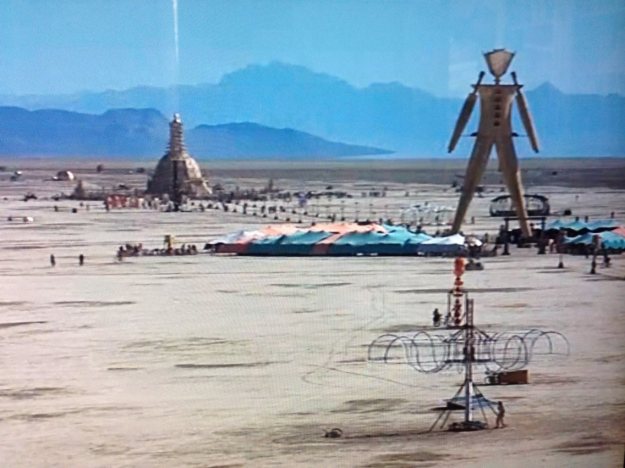 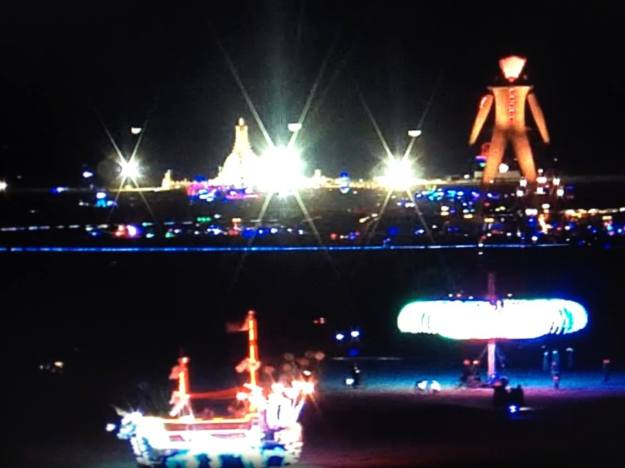 Burning Man 2014 – Heidi B.’s view of the Playa and The Man from inside “Embrace”

Burning Man 2014 – Dawn on the Playa Saturday am 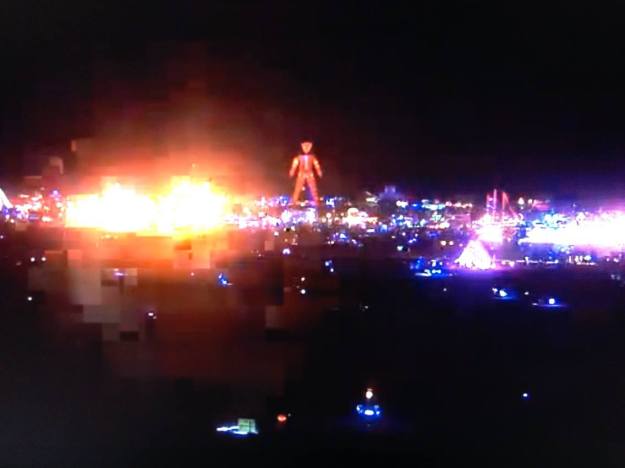 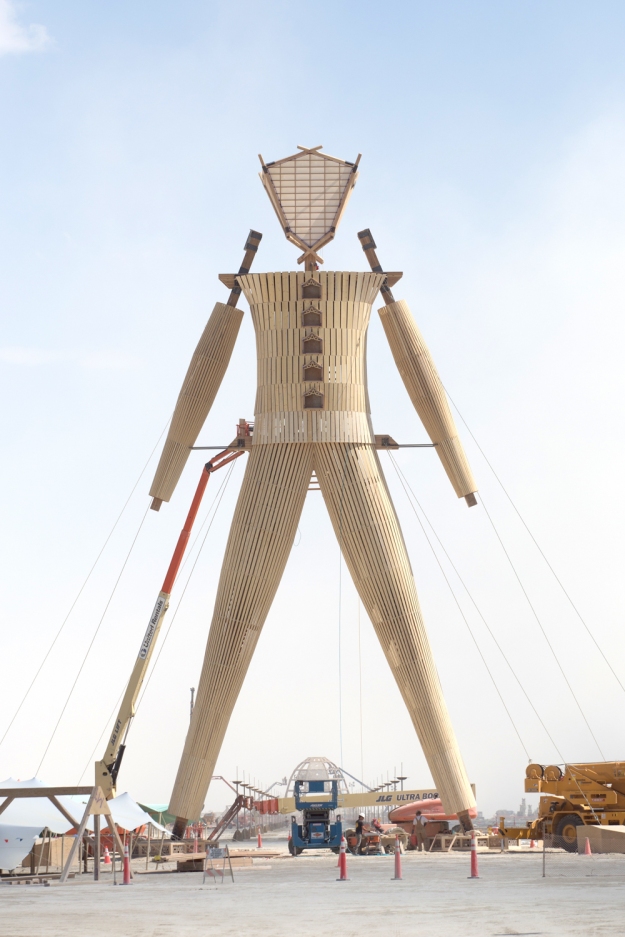 Gates are OPEN! Tuesday 6am – The PARTY is live! www.facebook.com/joshwilltravel

On opening day Monday, heavy rain and hail muddied the playa and caused the organizers to close the gates due to BLM restrictions on vehicles. The gates may have been closed but the PARTY was in full force Monday night into Tuesday morning. 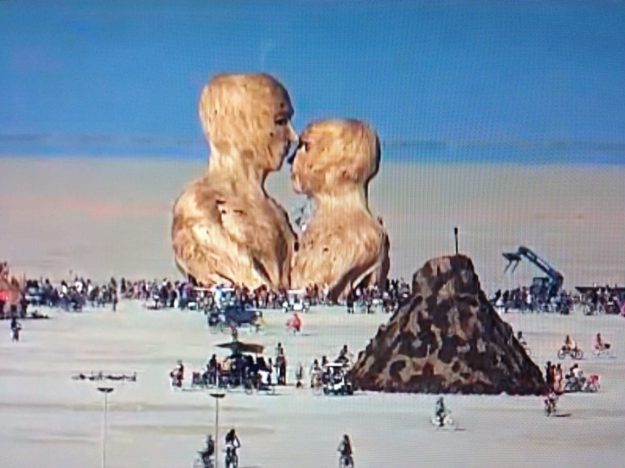 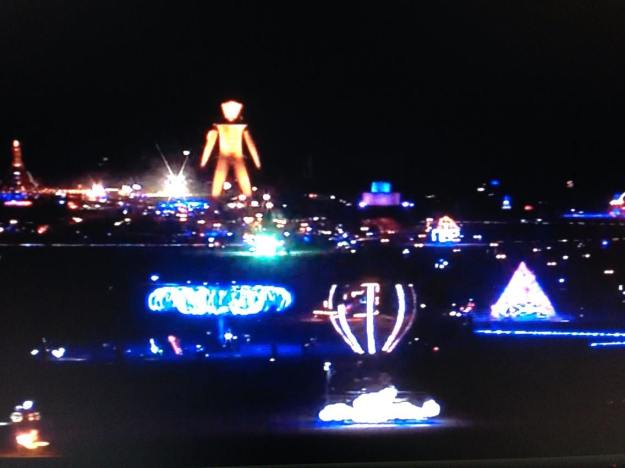 Heidi B. is on the playa (early entry) and is sending some cool pics back: