San Francisco History!
The Condor and Big Al’s on Broadway
Original photograph signed by Bob Kreisel and rescued for $2

The Condor Club and Big Al’s are located at the corner of Broadway and Columbus Avenue in the North Beach district of San Francisco. The Condor Club opened in 1964. The large marquee sign featured a cartoon image of Carol Doda with red flashing lights on her breasts. Carol Doda’s 44DD breasts were dubbed “the New Twin Peaks of San Francisco” and were insured for $1.5 million with Lloyd’s of London.

NOTE: The other famous clubs on the block are Roaring 20’s and the Hungry 1 Club. 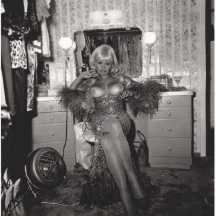 Carol Doda danced at the Condor Club until 1985 and died in 2015. Her only arrest happened in 1965, when police raided the club on April 22. She was arrested along with Pete Mattioli and Gino del Prete, the owners of the club on indecency charges. They were all found not guilty. She retired as a stripper in the 1980s but continued performing, and she also owned Carol Doda’s Champagne and Lace Lingerie Boutique in San Francisco until her death from kidney failure in 2015.

The original Condor Club closed in 2000. For a time it was a sports bar (and still is), and then a restaurant and a performance venue. The current Condor Club reopened in 2007 as “San Francisco’s Original Gentlemen’s Club” with a new neon sign.

“You know what’s funny about The Condor? 1) It’s not really a strip club until 6 pm, and 2) it has two entrances: one for the strip club, and one for a pretty unremarkable sports bar with big-picture windows facing Columbus St, a decent-enough draft beer selection, and live music. The two are separated by a small door frame with a velvet curtain drawn, so if you’re new and you make your way in through the Columbus entrance, you might not even put two and two together that you’re in a strip club. And, since we’re in the middle of North Beach, it’s exactly the kind of place a hapless tourist could wander into.” – Lauren Sloss in 2014

Big Al’s (the adult book store) closed in 2009. It is now a sandwich shop and cigar store. They kept the name and the neon sign.

Both clubs are San Francisco landmarks and an important part of the history of the city. The strip clubs of North Beach have been seen in many films and TV shows, featured on postcards and in travel and tourist brochures for over fifty years.