“It’s A Small World After All” 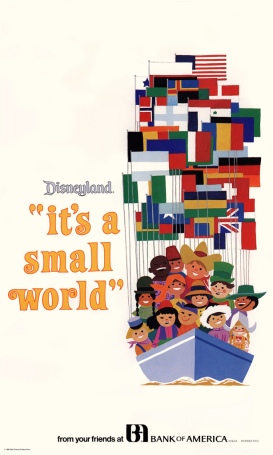 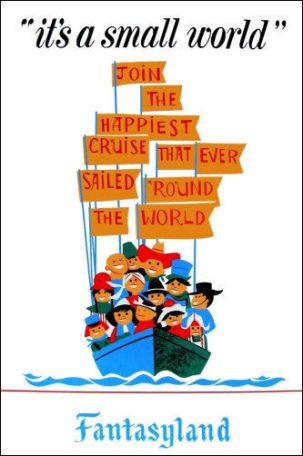 The Sherman Brothers were responsible for more motion picture musical song scores than any other songwriting team in film history!

In the 60’s, while working for Walt Disney, the Sherman Brothers wrote two songs for the Disney Pavilions at the 1964 New York World’s Fair: “Great Big Beautiful Tomorrow” for the GE’s “Carousel of Progress” and “It’s a Small World” for Bank of America.

NOTE: The Sherman Brothers also wrote songs for Mary Poppins, The Jungle Book, The Aristocats, The Many Adventures of Winnie the Pooh, Chitty Chitty Bang Bang, Bedknobs and Broomsticks, The Adventures of Tom Sawyer, The Adventures of Huckleberry Finn, The Slipper and the Rose, The Parent Trap, Snoopy Come Home, Charlotte’s Web, and many others. In 1965, they won two Academy Awards for Mary Poppins – the Best Original Score, which included “Feed The Birds”, “Supercalifragilisticexpialidocious” and the Best Original Song, “Chim Chim Cher-ee”

Walt Disney’s Private Office in Burbank, California (thanks for the great pics Craig!): 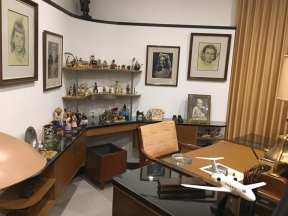 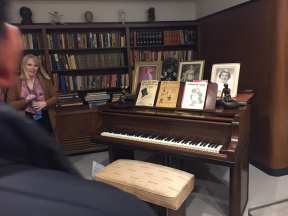 FROM A POST BY JEFFREY SHERMAN (Robert Sherman’s son):

As I’ve posted before, Dad and Dick wrote Small World while the Cuban Missile Crisis was going on. If you listen to the lyrics, it’s the Sherman Brothers reminding us all that…

It’s a world of laughter, a world of tears,
It’s a world of hopes and a world of fears,
There’s so much that we share that it’s time we’re aware
It’s a small world after all.
There is just one moon and one golden sun and a smile means friendship to everyone…
You know the rest.

Part of Dad’s great inspiration for this song was Martin Luther King. Dad thought he was magnificent and was surely influenced by MLK’s speeches and wisdom.
Because of his closeness with the Sherman Brothers and to thank them for writing these iconic songs, Walt flew my mom and dad and Dick and his wife out to New York on his private plane.
While they were there, Dad and Mom were driven on a golf cart through the yet-to-be opened fairgrounds. Dad spotted Martin Luther walking through the park and tapped his driver to abruptly stop.
To mom’s horror, Dad leapt out of the golf cart, limped with his cane (he was shot in the knee while a US GI in Germany WWII) as fast as he could to go over and shake the hand of the great man he so admired. Dad was like that.
As he approached Dr. King, out of nowhere, according to my mom, a team of huge bodyguards merged on this apparently crazy man with a stick who looked to be assaulting the great civil rights leader. Mom jumped off the golf cart and shouted, “It’s okay! He’s a songwriter!”
Dad was restrained a moment, till the truth came out. Shaking Dr. King’s hand was one of Dad’s most cherished memories.
At 19, my father, you see, had been the first US GI in to liberate Dachau prison camp. He was also the only Jew in this squad. Dad saw firsthand what prejudice and bigotry wielded and for the rest of his life devoted himself to righting that wrong, and other darkness through his uplifting creativity. “To bring happiness to people.”
This weekend, as we honor and remember the great Dr. Martin Luther King, I feel his message, and the Sherman Brothers words are more pertinent than ever before in this country.

“There is just one moon and one golden sun
And a smile means friendship to everyone…”
We should build bridges, not walls. We should welcome not repel. We are all humans who can help each other and coexist on this planet. There’s no reason for hate.
Smile at a stranger this weekend. Lend a hand where you can. Be kind. Forgive.
And then we will heal. Then we find peace.
Have a lovely weekend.
Happy Birthday, Dr. King.

The “It’s A Small World” original vinyl LP album with cover art by Mary Blair, was recorded near the site of the Watts riots. The Disneyland Boys Choir was actually the St Charles Borromeo Church Boy’s Choir from North Hollywood, California, conducted by Grammy-nominated Paul Salamunovich KCSG (RIP June 7, 1927 – April 3, 2014). They also performed on television in the Dinah Shore Chevy Special, The Lucy Show, and in films and on the soundtrack of The Godfather.

“It’s A Small World” Inside at Disneyland USA

The Sherman Brothers received a star on The Hollywood Walk of Fame (located at 6914 Hollywood Blvd) on November 17, 1976.

It’s the most performed song of all time!