Sunday BBQ Dinner at the Boneyard Bistro in Sherman Oaks!

We heard good things about this place via friends on the interweb.
We were originally going to have an Italian dinner at Gio Cucina Napoletano (read our previous Blog Post), but when we got there, they were varnishing the tables and chairs and so were closed for the night. A quick decision was made and we headed over to the Boneyard Bistro on Ventura Boulevard near Woodman in Sherman Oaks for some BBQ.

NOTE: There have always been great BBQ places in San Fernando Valley. Growing up there were places like Monty’s Steak House, The Oak Room, Houlihan’s, Charley Brown’s, Victoria Station, and Love’s BBQ. Recently, a lot of old time BBQ joints have closed down: the El Paso BBQ in Tarzana, and My Brother’s BBQ in Woodland Hills are now gone, the SmokeHouse BBQ in Van Nuys didn’t last long, there was once a Mr. Cecil’s Barbecue in almost the same location as the Boneyard, but it closed well over a year ago. And just recently the Tony Roma’s chain BBQ restaurant in Encino closed after many years and the location will soon be a crappy Norm’s Restaurant.

The Boneyard Bistro has Valet Parking in front for $6.00 + tip, but we were able to find street parking at a meter and it was Sunday night so you don’t have to pay. Parking is a major problem on Ventura, and there is Starbuck’s on the corner to compound the problem. Just sayin’.

The place was busy, as shown in the photos, the bar was crowded and the dining room was already more than half full. It was a chilly evening so the patio was almost empty.

Choose your seating: The Bar (high-top table), the Dining Room or the Patio.

We chose the Dining Room and were seated immediately at a table for two. The Sunday night football game was on the television (Dallas Cowboys v. Philadelphia Eagles). The service was good. We ordered our drinks and food. They brought us the drinks and in very short order, they brought us the food. We waited a little bit for the bread and fried corn muffins, and then before we could butter our bread, they brought out the entrees.

Not sure how to describe the utilitarian design of the place, other than functional. From the street is has a “Chicago Diner” type facade with a glass enclosed patio and big block letters. High ceilings and hard surfaces with wood accents amplify the sound. There is a weird painting in the dining room that is the length of the full wall and it’s a skeleton in red heels holding a platter of fire. The skull and cleaver is their logo and brand.

We were seated by the kitchen doors and prep station, so there was a lot of activity passing us and all around the table, and the dining room is a little “close-quarters” even for the size, because of the number of tables and space between them. The noise level in the bar area was very loud and happily the dining room was not as noisy. Service throughout the meal was good, and all of our requests were handled quickly.

Go ahead and have a beer (or a cocktail from the bar):

We ordered the $9 flight of beers, served in four small glasses. It was a very good deal.

ON THE MENU: BBQ baby back ribs, fries, baked beans, bread & fried corn muffins, a flight of beer, and a coke. Tiramisu Creampuff for dessert.

It’s a good menu. There are a lot of things to try that look really good. They also have salads, but who has a salad at a BBQ place? We always judge a BBQ restaurant on their ribs, and we weren’t disappointed by theirs. 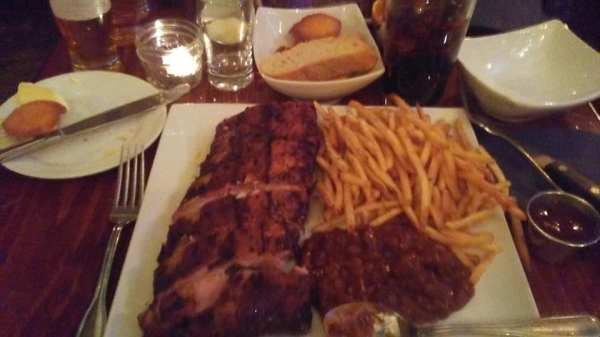 It was an excellent BBQ dinner! We ordered off the Ala Carte Barbecue list. The dry rub on the baby back ribs was subtle, spicy and not too peppery. The pork was smoked for a long time, it was juicy and came right off the bone. The beef ribs were big and beautiful. They give you the option of “wet” or “dry” ribs, and their BBQ sauce is very tasty, both on the meat and “on the side”. Their homestyle baked beans have nice chunks of meat in the recipe and was an excellent side selection. They have shoestring fries, and the first order was not hot, so our waiter brought us another order just out of the fryer.

The portions are huge, so each entree is actually two meals, and good for sharing. We ended up taking a big bag of leftovers home, like most of their customers, for later.

They also have fabulous creative desserts (like banana puddin’ brûlée made with Nilla Wafers and chocolate chip cookie dough egg rolls with vanilla ice cream and chocolate ganache) but they were all a little too fancy (and too expensive = $11 per dessert), so we decided to pass.

We enjoyed the food, and will probably return soon when we have our next BBQ craving.

NOTE: And so DESSERT? After a brief conversation in the car, we decided to stop and get something sweet on the way home at the Paris Baguette. My dinner companion had a craving for chocolate cake. I wanted tiramisu when we were originally going for Italian food, so of course, a Tiramisu Creampuff for dessert:

Read the Previous Blog Posts about the Paramount Ranch>

One reply to “Sunday BBQ Dinner at the Boneyard Bistro in Sherman Oaks!”