See our other Blogs about the Faire and the Paramount Ranch for more pics! Use the SEARCH BOX at the top of the page and SEARCH: PARAMOUNT RANCH^^^^^^^^^

ARE YOU READY?
THEN, LET’S BEGIN! …Take a little trip on ThrowbackThursday!

Exit at Kanan Rd off the 101 freeway, go west past Agoura Rd, make a left on Cornell Rd and follow it to the Paramount Ranch park entrance. Admission is FREE, Parking is FREE.

The Paramount Ranch is Open 8am to Sunset in Agoura, California

NOTE: You may experience heavy traffic at the Kanan Rd exit on weekend “Beach Days” or if there is an event at one of the wineries or during rush hour traffic periods. Plan Ahead!
(And the Banjo & Fiddle Festival and other events are still held at the Paramount Ranch)

As you approach the Paramount Ranch Park entrance, after you pass the Fire Station, you will enjoy a great view of the park’s landscape and the old racetrack from Cornell Rd. 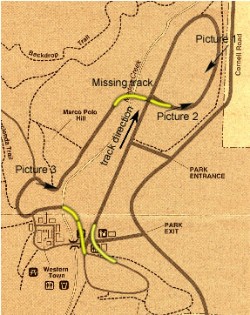 In 1956, the owner of Paramount Ranch decided to build a road-racing facility. He approached Ken Miles and Dick Van Laanen to design the road course. They designed a paved road course nearly 2 miles in length. The road course included 11 turns with uphill and downhill sections, a straightaway just shy of ¾ mile, a bridge and underpass as well as a lake opposite the start/finish line. Most of the drivers were weekend racers and the lack of safety features along with dangerous curves were more risk than they were willing to take for a hobby. The racetrack was a two mile figure eight course with a bridge between turns 3 and 4. The racetrack pits and grandstand were located on the current parking lot. Bob Bondurant described the course as “unforgiving but a real challenge”. A total of seven races were held at Paramount Ranch. Five events were sponsored by the California Sports Car Club (CSCC) and two by the United States Auto Club (USAC). After several drivers were killed on the track (3 on the same day) it was closed in 1957.

The National Park Service maintains the entire ranch including the racetrack as a historic site. Very little remains of the racetrack as of 2015, the bridge still remains however it has been blocked off so vehicles cannot drive over it and the road underneath the bridge is overgrown with trees and shrubs. Home construction on the neighboring hillsides has caused water runoff erosion that destroyed the original layout and terrain of the land. Much of the road is no longer there. There is some sentiment among park rangers to repair the circuit and return the track to its former glory, but there are no plans in the foreseeable future. The Paramount Ranch Racetrack is featured in several movies filmed in the 1950’s and 1960’s: “Road Racers” (1959), “How to Stuff a Wild Bikini” (1965), “Devil’s Hairpin” (1957), “Spin Out” with Elvis Presley (1965), “Munster Go Home” (1966), “The Love Bug” (1968) and “Herbie Rides Again” (1974).

Enter the Paramount Ranch Park from Cornell Rd,
turn left at the bottom of the main entrance and park near the Ranger Station.

The park is open 8am to Sunset everyday! Take a tour of Western Town, visit the Western Town Meadow and then enter the park proper and the hiking trails on the other side.

RIGHT CLICK ON THE PIC AND “OPEN IN NEW WINDOW” TO VIEW THE LINK!

NOTE: These pics are from a couple years back.
The Western Town pics are in the previous Blog>
“Return to Paramount Ranch – Agoura, California: Part 1 Western Town”

We walked the site and here are some selected pictures: 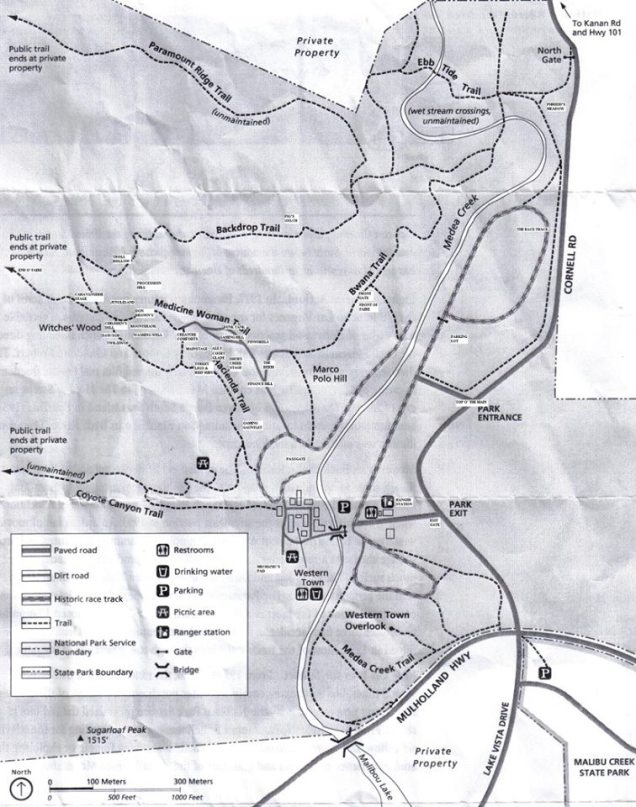 Map to the Paramount Ranch w/locations

We will be adding more to this Blog and there will most likely be a Part 2 coming soon.
We just wanted to post this before this year’s annual reunion. More to come! Enjoy!