“We’re fools whether we dance or not, so we might as well dance.” ~ Japanese Proverb

Not This Year’s Invitation, but You Never Know…

The last third of 2016 really kicked our ass. We really weren’t feeling up to a big party this year and were really prepared to stay home with the dogs and ring in 2017 quietly. We were invited to a couple of parties and a couple of big events, but at the invitation of an old friend, we decided to venture out into the night and attend the Annual Happy New Year’s Eve Party at KJ and Steve’s in Burbank once again. This party has been happening every year since the 1980’s…

35 YEARS+ of Friendships! Old Friends who are now really old old friends! Marriages, relationships, divorces, births, deaths, illnesses, good times and bad.
There’s a lot of history, stories and good memories associated with the house and all the fun times we’ve had at the many birthday and holiday parties held there over the years. 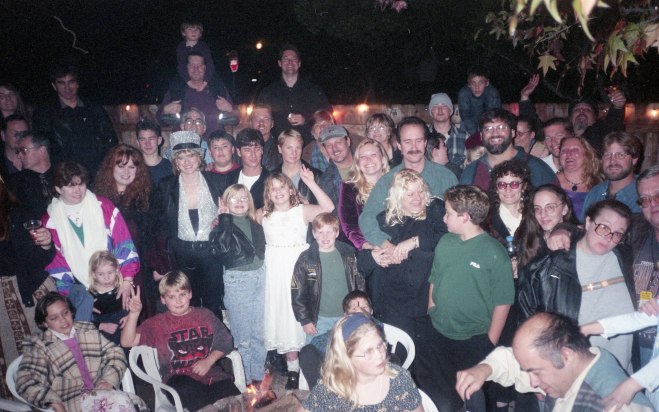 The parties are not as rowdy as they used to be in the 80’s and 90’s, and all the children who used to run around the house are all grown up (some with children of their own), as are most of the adults now…

Tempus fugit! Time flies! In the old days this was a “destination” party and people would come from out-of-town and camp in the backyard! There were years when it was standing room only and other years when there wasn’t an invitation sent out and only a few people showed up. You never knew who might be in attendance from year to year, or who might stop by on their way to another party. And then some people stopped coming. A lot of the “regulars” from the past have moved away, found other parties, grown old or now only celebrate with us in spirit. And some of the younger party guests weren’t even born when the celebration first took place!

And so, with the coming of the New Year,
THE HAPPY NEW YEAR HOUSE PARTY CONTINUES!
Here are some Happy New Year 2017 House Party pics! 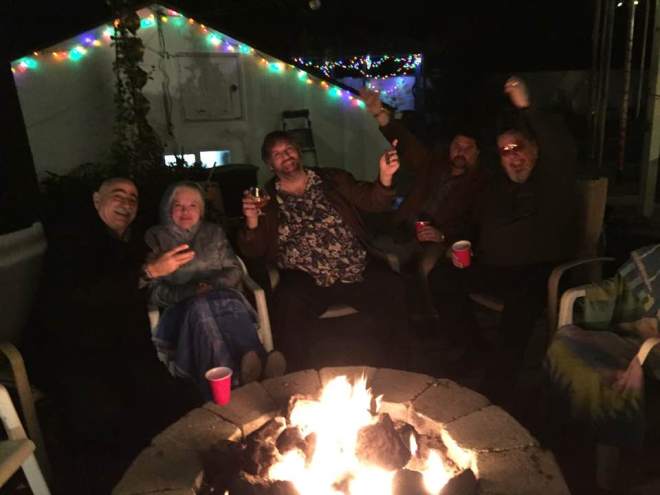 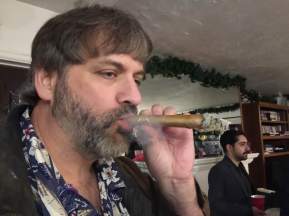 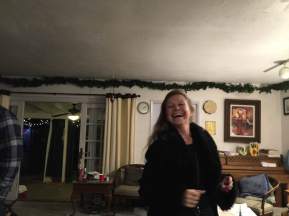 In the old days the party would continue until dawn and guests would literally be passed out on the floor. We last attended this party at the end of 2013 when everyone went home just after midnight and a family card game broke out in the living room. We always bring a nice bottle of champagne or fine wine as a gift for our hosts whenever we visit for New Years. In the past we’ve also brought a bottle of Stolichnaya vodka (size might vary from year to year and decade to decade) for our own consumption and to share, along with mixers, snacks and other refreshments. This year we just brought a big bottle of nice wine (a Malbec from Argentina) for our hosts and a single can of coke that we plugged with a single shot of Captain Morgan’s Spiced Rum for old times sake. 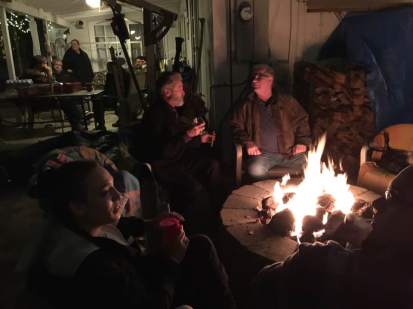 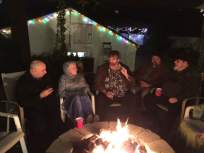 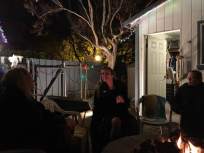 Gather Around the Fire and Catch Up With Old Friends!

The tradition of the circle of friends around the fire began when the firepit was just a hole with a gas pipe sticking out of it. In the old days when the gas was off we burnt wood in the red brick firepit (and often things that were not wood would be thrown in the fire). Now it’s a large cinderblock pit designed for a party with an adjustable gas flame, but the tradition continues. (Who threw the plastic champagne popper in there?)

The house is designed for a party. There’s a large living room, the kitchen and the food table, the covered back patio and bar area, the firepit, the pool area and hot tub, the office and the bedrooms. In recent years, modular units (more rooms) have been added as additional party space. The house and backyard are always decorated with a lot of festive lighting and there’s always a real fire in the indoor fireplace.

Regardless of the weather conditions in December, it’s always been an indoor-outdoor event. Some years it’s been “California freezing” cold or there’s been rain, but the party goes on regardless and the celebration adjusts accordingly. And just like the Rose Parade, the weather has never prevented those in attendance from having a good time!

This year it was cold outside, but not freezing. And someone who won’t be named turned the gas for the firepit all the way up to “Viking Funeral” level so it was nice and warm around the outdoor fire. Everyone ate and drank and some of the boys smoked cigars.

Tradition also has everyone gathering in the living room and on the patio for the Midnight Countdown and “Stroke of Midnight”. Helium balloons filled with glitter and confetti are popped, people are kissed and everyone toasts the New Year at twelve o’clock. There’s also a large artist pad and box of colored pens, and anyone can sign or draw on the page for the current year. And the old pads and pages going back to the 1980’s are available for viewing (and reminiscing about the past).

Balloons Filled with Glitter and Confetti…

There’s always too much food! It’s sort of a potluck, and some people bring food, but our gracious hosts always provide Dinner and Snacks for everyone! It’s also BYOB (Bring Your Own Beer or Alcohol) but there’s always a full bar too. In the old days, there used to be a row of “personal coolers” filled with people’s own preferred drinks and snacks.

Food, Drink and Other Pics from the House Party:

NOTE: We tried it and it was not the “Best Damn Root Beer”… sorry. It was “hard” root beer (with alcohol) and tasted like diet soda, so we only had a sip and then gave it away. DON’T DRINK AND DRIVE! We stopped drinking before midnight (and we really didn’t drink very much at all) and then waited until after 2am when the party was done before driving home (and there’s always room to crash at the house if you’ve had too much!).

It was great to see our old friends and celebrate together again! It was a warm and fuzzy place to ring in 2017 and a good time was had by all. Thanks to everyone for the fun party! 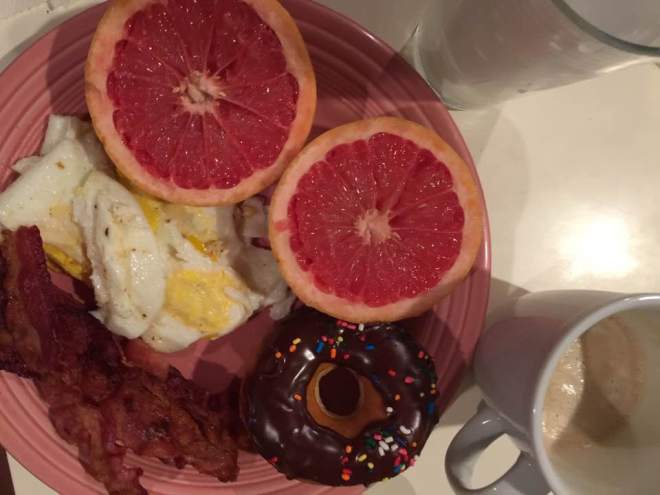 Post-Party Breakfast at 3am

January 1, 2017 – 3am PST – Breakfast at Home
On The Menu: 3 eggs over medium, crispy bacon, pink grapefruit, a leftover donut with chocolate frosting and sprinkles, and an espresso with whipped cream