The historic Barrel Cafe (Idle Hour Cafe, Rudy’s Keg, La Cana Restaurant) on Vineland in North Hollywood is being restored and protected! I was driving up Vineland the other day and saw that they were finally restoring the old La Cana Restaurant, so I took this picture. I posted the pic in a group on facebook, and a Blog just happened. The building has a great history and it’s being preserved!

Built in 1941 and closed since 1984, Bigfoot Lodge owner Bobby Green and his 1933 Group picked up the building at auction and a full restoration is underway. It reopens sometime next year as the Idle Hour Cafe.

UPDATE! 17 January 2015 – The restoration is almost complete and it looks amazing! The woodwork is beautiful both inside and out! The gate was open and the guys were inside working on a Saturday afternoon. I asked if I could take a few pictures of the interior but they told me there was a “Gag Order” and they weren’t in charge of the decision. I’ll just say it was very impressive. The Bar, the interior space and the dining area…everything is beautiful wood. Opening in February as the new Idle Hour Cafe, or so I was told….. (and there’s a liquor license permit notice posted on the wall)

Completely rehabilitated by 1933 Group, the famous barrel bar, abandoned for years in North Hollywood, has returned. Built 75 years ago, the design was meant to draw in drivers. 1933 Group worked on this project for over 3 years before opening The Idle Hour in 2015.

The restored wood glistens with golden hues. Patrons can have a cocktail or eat inside the barrel or on the patio where the centerpiece is the rescued Bulldog Cafe which served ice cream and tamales 1928-1960 at 1153 W. Washington Boulevard in Los Angeles. 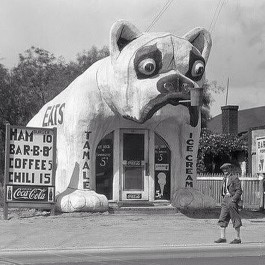 3 replies to “The Historic Barrel Cafe on Vineland in North Hollywood is being restored!”